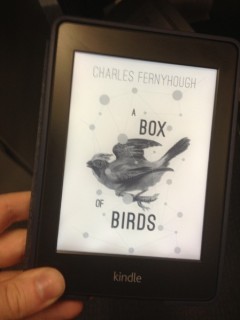 A Box of Birds by Charles Fernyhough (Unbound: 2013) Dr Yvonne Churcher is a neuroscientist trying to map the brain and, ultimately, find a cure for dementia. Things go awry when two of her students wrap her up in a world of eco-terrorism, corporate espionage, and questionable experiments.

You know who gets a lot of heat? Dan Brown, that’s who. He came out with his mega-blockbuster a few weeks back, and a million literati commenced with a synchronised eye roll. Just another cheap thriller from a guy who’s got far too much attention.

I disagree. For starts, he’s big because a ton of people like him. And when you start disagreeing with the opinion of millions of people, you should maybe get over yourself and look a bit closer.

The other reason I disagree is because what Brown does isn’t easy. I know that because I’ve read other people try similar stuff and fail.

Which brings me to A Box of Birds. Fernyhough would probably recoil at the Dan Brown comparison, but I think it’s valid. There’s a big mystery being unravelled in this novel, with shadowy bad guys, globe-trotting chases, and a hammed up love story in the middle. Fernyhough probably has more worthy ambitions than Brown. A few passages scream out “I’M A LITERARY NOVELIST!” But on the whole, there’s not too much difference.

Apart from, of course, Brown makes this stuff look good.

I absolutely trudged through this book. Two weeks of dreading to pick up the Kindle. Why? There was confusion in the plotting from the get go. Far too much was left to the reader to infer. I’m all for a bit of tag teaming between author-imagination and reader-imagination, but this was ridiculous.

There were large periods when I simply didn’t know what was going on, which meant I stopped caring. Say what you want about Brown, he makes you care about what’s happening, usually despite yourself.

There was also a cast of characters who I found by turns a) boring, b) annoying, and sometimes even c) hackneyed. And before you say it, I know Brown’s characters have a heavy dose of the two-dimensional about them as well, but they’re also bigger somehow, and their deficiencies matter less in the face of superior plotting and pacing.

Don’t worry, I’m not headed for another Wilbur Smith moment here. There were redeeming factors.

Whilst the “literary” sections were a bit too obvious and a bit too desperate, they were also occasionally effective and occasionally beautiful. There was the odd turn of phrase, the odd bit of clever structuring that hit me. They made me wish Fernyhough would just leave all this thriller-esque doodling behind and write something a bit less plot or character driven.

Pick an emotion or a belief and it seems this guy can write it down rather expertly. But ask him to plot and page-turn, and it seems he trips up on his own shoelaces.

The end of the good streak. I don't like to be mean, but I really didn't enjoy this, and I know you know when I'm lying.

Let’s see if we can pick it up again next time around.