infinite jest - worth it 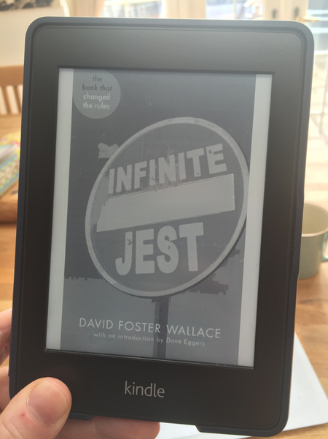 Infinite Jest by David Foster Wallace (Litte Brown, 1996). A bloomin’ big book that seems glib to summarize in a couple sentences. Amongst other stuff, it involves tennis prodigies, drug addicts, spies, revolutionaries, an unsettling image of the future, and a film so good it’ll kill you.

Well, mostly. This thing is a bona fide classic, and it deserves to be, not just because of its ambition and scope, but because of the writing (and you know how I love bang-up good writing).

The standards set and maintained are huge. Yeah, it’s a freaking long read, but pretty much every page carries treats. Language, concepts, structures, story-telling flourishes; Wallace shoots regular bullets, and it makes it fun to work your way through.

The plot is complicated, and slowly revealed. The vision of the future he creates is not straightforward to navigate. It’s a book that does not give up its story or narrative easily. You could drive yourself nuts trying to figure out how the strands connect, and divining the point of the section you’re mired in.

But while you’re spending all that time trying to figure out what the hell is going on and who is doing what, the frustration is kept at bay by that writing. It’s clever and it’s fluent and it flows along smoothly. I never lost the sense that this was golden stuff, and I loved it for that.

And once I got my head around what was going on, the points Wallace was driving at, it took on a whole other light. Once the penny dropped, it became more than an enjoyable read. I started to recognize the ingenuity and insight that makes this a classic. It’s more than well written; it’s urgent. It’s damning. It’s revealing.

Which lands this book right in that tough-but-worth-it pigeon-hole. It’s a commitment of a book. If you’re a slow reader like me, it’ll take you some getting through. It’s a book to carry everywhere and dedicate your spare time to. But it deserves all the attention it demands from you. It deserves it because it’s bloody good.

Take a couple months off other stuff and read this. Read it to the end. And if you don’t think it’s worth it as well, soz.

Next week, another modern classic I’ve wanted to read ever since I finished Fahrenheit 451.