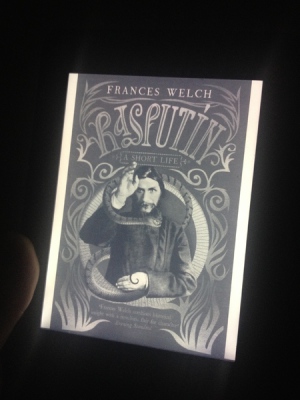 “Rasputin – a short life” by Frances Welch (Short Books Ltd.: 2014).Pretty obvious what this one is about, right? It’s about Rasputin, and his short life. This peasant mystic who became the closest confidante of the last Russian royals, and whose demise is seen to go hand in hand with theirs.

“Rah Rah Rasputin!” That was Boney M. Well, it was me doing Boney M. Interesting song that, but not the only time Rasputin has dripped into modern popular culture. There’s been films and stuff too. And now this book. Exciting chap, he must have been.

Self hailed as a “short life,” this book does a Ronseal (exactly what it says on the tin). It’s a pretty short account of what Rasputin got up to, which is a bunch of stuff. This guy lived a full life. Bloody chaotic. He followed whims. He had crazy nuts ideas and he went with them. He was a bit of a sex pest, and was unashamed in his dedication to such pestering. His list of allies and enemies changed hourly, though of course the Tsarina was pretty constant. And this book lays it all out there, scene after scene, full with the equally odd characters that also occupied this surreal time in Russian history.

And that’s one of the attractions I guess, the surrealism. There’s not a lot about Rasputin’s world that’s recognizable today. Miracle healings. Absurd plotting. Holy men talking in tongues and screaming their crazy thoughts out loud (and being taken seriously). Rasputin and his time is fascinating because it existed at all, and because we’re in such a different place now.

But that’s what gets you in. That’s why you buy the book in the first place. Because the whole idea of Rasputin is weird. What this book does not do, not one bit, is build on that. It races through episode after episode, explaining the constant shifts of loyalties with such rapid fire that it takes on the air of a bohemian soap opera. But it rarely interrogates stuff. It rarely asks why.

Sure, I stayed interested, because of the sheer colour of the story. And because the book isn’t long, that initial awe was enough to carry me through to the end. But, when I got to the there, I felt a little short changed. Like I now knew mostly what happened, but not why. Like the plot had been told, without the depth needed to create connections.

So we end up with a pretty average

Fun book, and (channeling Jeeves) it’s jolly to know stuff, but it’s a bit disposable after that.

Next week, another non-fiction about longitude, which sounds more boring than Rasputin, right? But I promise you, it isn’t.