breakfast with the borgias - king+ 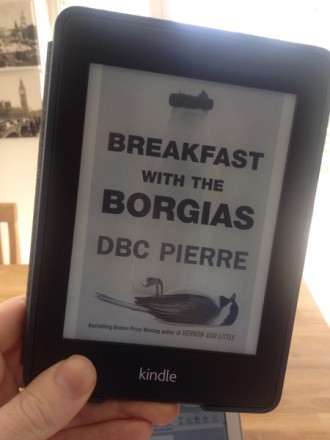 Breakfast with the Borgias by DBC Pierre (Hammer: 2014)DBC indulges in a bit of Hammer Horror, which apparently he’s quite the fan of. Ariel Panek finds himself in a backwater hotel in rural England following a plane ride gone wrong. He’s surrounded by the kind of eccentricity that gets the mid racing with all sorts of possibilities. All (obviously) is not as it seems.

You know I love DBC like some sort of obsessed schoolgirl. So I’m going to state the obvious right off the bat. I really enjoyed this. Of course I did.

I like to think I’m not blinded by fandom though. I like to think I’d notice if DBC started mailing it in. If he started to lose his shine. I did my best to approach this afresh, and let him prove to me all over again that he’s worth the awe I think of him with.

And he is. He just plain sure fire is. This is a different kind of book than his previous. A different sort of genre. DBC wanders into horror fiction, and the feel of the book is dialed in appropriately. There’s a between-the-lines eeriness even in the seemingly every day sections of the book. He creeps up with the revelations so softly that you’re constantly a few inches away from comfortable the whole way. He creates an atmosphere so creepy that your mind races the whole freaking time trying to second guess every little thing.

So the intangible feel of the book is a plus. As is the plotting and the pace of the reveals. But, as always with DBC, the thing that kept me locked in was the language. It’s just explosive in a thousand big and small ways. Always the right words, always the right imagery, always the right sentence rhythms. It just connects it all together in a way so few writers can.

It’s like if Stephen King could add to his out-of-the-park imagination with some actual literary talent. And that’s not a dig at King, the guy is a giant. But for all his skills, too few of his books match his vision and plotting with honest to goodness engaging language.

DBC isn’t the plotting God that King is, but he’s not far off. And he wipes the floor with him when it comes to creating rich prose.

So for DBC, another high score…

I think nothing will match the feeling I got when I first discovered DBC, but I’ll always keep coming back for more.

Next week, a classic I had never heard of.