meta - missed opportunity (unless you're 16) 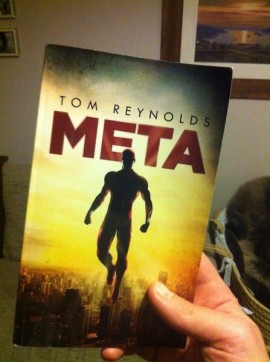 A guest review!!! The below is from Brother GBR. My actual brother that is, not just a close friend who I call brother, like a dude.

Meta by Tom Reynolds (CreateSpace Independent Publishing Platform: 2013)A book written for young adults, about a world where random people all over the world are endowed with super powers by mysterious metal bands.

OK, here we go, reviewing a book. Writing the first guest review on the world famous GBR is a lot to live up to isn’t it? How hard can this be?

Turns out it can be tricky. Really tricky in fact, especially when you genuinely like someone whose book (spoiler alert), isn’t all you hoped it would be.

I’ve chosen my words pretty carefully there. It’s not that this is a bad book, it just could have been so much better. Tom Reynolds is actually a bit of a hero of mine through his work in his superb podcast (check out http://www.tcgte.com/) and the subject matter is right up my alley (who doesn’t love superheroes?). I should love this book, or at least like it a lot. In the end, I suppose I just liked it a bit.

There was a lot to like in this book; the plot moved along at a good pace, Tom’s writing style kept me involved with the story, and the main character had an interesting back story that I was looking forward to learning more about. But while there was a lot to like, there was, unfortunately also a decent amount that I wasn’t so crazy about.

Here’s the problem; the book is aimed at young adults. I’m 33.

I just couldn’t get past some of the things I might have let slide when I was 16. The best friend with no personality who was shoehorned into the book to flesh out the main character’s personal life. The popular girl who might just have a crush on our geeky hero (spoiler alert, she does. Obviously she does). The school bully who is so mean you’d love to see him get his comeuppance. And the little hints that are just enough to make it obvious this is meant to be the start of one of those Potter/Dark Materials/Hunger Games style series of novels that the kids seem to love these days. In some places, it’s all a bit too obvious.

Also, and annoyingly for me (and I bet for Tom too), there are just a few too many jarringly obvious spelling and grammatical errors that the editor really should have caught. Not loads you understand, just enough so you’d almost forget about them until another one slaps you in the face like a wet fish. Unpleasant.

It’s not all bad. There’s a good amount of humour, and the main character is a believable high school kid with an interesting story even if he wasn’t the world’s most powerful super-being, but I really couldn’t get past the downsides enough to enjoy it as much as I hoped I would. Maybe that’s my problem and not the book’s. Maybe I’m just too old, and today’s kids, with their inability to wear socks, get proper hair cuts or tuck their shirts in, will love it. Who knows? Not me, that’s who. I’m 33.

So there you go. Now here’s the bit where Gav normally gives the book a score out of ten. Obviously I’m not going to give it a ten, not least because it’s impossible for a book to get 10 out of 10 under any sane person’s criteria [EDITOR'S NOTE: IT IS POSSIBLE. SEE HERE FOR WHY. QUIT TALKING JIVE, TURKEY].

Instead, I’m going to go with