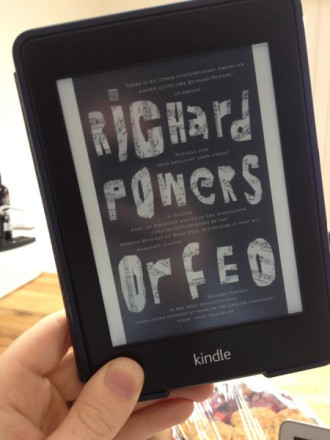 Orfeo by Richard Powers (Atlantic Books: 2014) Peter Els has led a long and varied life, full of passion and eccentric detours. Now retired, the composer and amateur biologist tries to combine his two expertise, and things go a bit FBI.

I’m a language junkie. You know that about me. I effing love it when words are put together just so. I get all lightheaded when sentences bounce along with the rhythm that makes you hear your heartbeat. Good books need to be a bunch of stuff to a bunch of people, but for me, my favourites will always be the ones where the language knocks through walls. Doesn’t need to be flowery or include a hundred words you have to look up in the dictionary; it just needs to have some art to it, some passion.

So imagine my excitement on discovering Richard Powers. Didn’t take much scrolling through Amazon reviews to find out that this guy takes language seriously. He effing loves language too. So I figured we could be friends.

Orfeo shot out the traps. It had me all gooey pretty quick. Feel free to believe the hype about Powers, it’s pretty much true. In Orfeo, he puts together some goddamn beautiful passages. Grace and power and feeling and delicacy. It’s a pleasure to read. One of those where you look forward to getting a little time alone, just you and the book and a bottle of something nice, maybe a little bit of candle light, put the phone on silent… you get the picture.

It’s only with this level of talent that Powers can tackle the “writing about music is like dancing about architecture” trap. The trap that says this phenomenon that is music can’t be related in any other form. Its punch becomes less as soon as someone tries to translate it. And sure, that’s probably true, but Orfeo gets about as close as anything I’ve ever read in its attempt to relate the nature of music. It’s a different kind of beauty and a different kind of power, but reading Orfeo gives you at least a sip of the music that is at its core.

Outside of the writing, Orfeo has other stuff going for it too. The concept is a strong one. The themes explored are deep. The protagonist is wonderfully flawed and expertly revealed.

It’s only in the structure that I have a bit of a beef. The majority of the book is spent relating the backstory to current events, and frankly, the backstory is way more interesting and rich than the current day stuff. I was annoyed every time I got dragged back to the present, especially towards the end. I think Powers could have been less clever with the structuring – just make it linear.

So a black mark, but not a big one.

I’m going back to read more Richard Powers. And you can’t stop me.