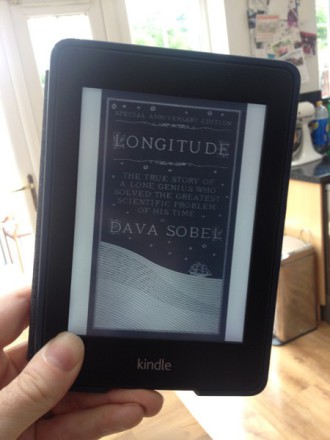 Longitude by Dava Sobel (Walker: 1995) A fortune was on offer for the person who could figure out how sailors could calculate their location at sea. The all elusive method for finding longitude puzzled great minds and gave rise to heated rivalries. The answer came from an unlikely and unappreciated hero. This is his story.

History is bloody brilliant. It’s just full of goddamn STUFF! Stuff that was huge at the time; that people spent lives debating and arguing about and agonizing over. World changing stuff.

And what I love about history, what I love about this stuff, is that so much of it remains obscure. It’s because there’s a ton of it, this stuff. Your average Joe can’t possibly walk around holding every great debate in his head. We tend to focus on the big stuff when it comes to popular knowledge. The world wars. The idea of colonialism (though probably not the details). The Romans. And that’s about that.

But then you get pointed towards stuff like this. A book dedicated solely to the race to find a method of figuring out where the hell we are. To find an accurate method of calculating your longitude whilst at sea. Essential to actually making your way around out there. Forget latitude, that’s for pre-schoolers. Easy as pumpkin pie. But longitude, that was a tough nut to crack. And without it, latitude was fairly pointless.

This was a race to knowledge that consumed lives. It was the holy grail, and just as elusive. It spawned a bag full of ideas. It was a question that inspired thinkers from all countries, and one that launched international collaborations lasting decades. It got caught up in political intrigue that lasted generations. And (this isn’t a spoiler, it pretty much says as much in the blurb) it was solved by a backwater genius who ferreted away in his workshop for his whole life, hunting perfection, only to be snubbed by the establishment he was so removed from. And what’s more, he solved it by creating clocks of such beauty that they still hold people in awe in a couple of different museums (one of which is next door to my work, and which I am desperate to find ten minutes to pop out and drool over).

How effing romantic is that! It’s epic. It’s a HBO series waiting to be made.

So yes, fair to say this is a true story that grabbed ahold of me. It’s written pretty well too. The odd flourish of art in the prose. Not much. Not quite a history book of the beauty of HHhH, but every now and then it comes through, Sobel’s respect and general reverence for his subject matter. Especially the last passages, which injects some real emotion right when you weren’t expecting it.

I’m talking myself into a hall of famer here, right?

A scorcher. Not a 10, not quite DBC, but big. It deserves it. Been a while since I’ve read a book that I actually REALLY want you to read as well. Like, a lot. Then we can all meet up and speak about it. Sound fun? Good. See you in that place we know. Usual time.

Next week, back to fiction of the criminal kind.