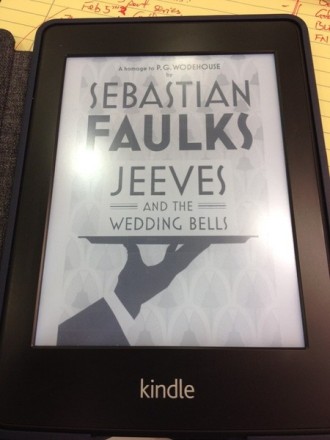 Jeeves and the Wedding Bells by Sebastian Faulks (Hutchinson: 2013) Faulks, with full permission from the P.G. Wodehouse estate, dusts off Jeeves and Wooster and sets them off on another spin. Bertie’s mate Woody is engaged to be married, but it’s all falling apart. Enter Bertie to the rescue.

Oh brother, is this a tough gig. Faulks let himself in for one here. I bet as he was hammering away at this, the weight of the legions of P.G. Wodehouse fans waiting for him to trip up was keenly felt. How could he not think about it, right?

But he ploughed on anyway. And the result has been met without the cacophony of boos and hisses you might have expected. Rather, applause has been the order of the day, and it’s not hard to see why.

From a writer better known for desperate epics set in the trenches of WWI, a Jeeves and Wooster jape is a change of pace. But change his pace he did. Honest to goodness, the prose is practically indistinguishable from ole Pelham Grenville himself. Every sentence is worked over for maximum comic effect, and there’s not a lazy turn of phrase in sight. Bertie Wooster’s voice is loud and clear, and, more to the point, alive again. Jeeves is as dry as ever, and the supporting cast are typically colourful and brilliantly cartoonish.

But Faulks takes a few risks in his character development. A lot of risks, in fact. Wodehouse never cared that much for developing his characters. They were what they were. But Faulks inserts a bit more emotion to the Jeeves and Wooster relationship than there ever has been. He presents a more three dimensional picture of Bertie in particular; one that makes you love him all the more. An idiotic buffoon out for a laugh? Sure. But also a well-intentioned innocent whose only fault is failing to match his well-meaningness with the wherewithal to put it into practice. (That’s what Jeeves is for, after all).

Massive risk, right? He colours outside the lines Wodehouse set down, albeit subtly, and only by a few centimetres. It works though. It makes Bertie a human being, and doesn’t detract one iota from the fun that is packed in the other 99% of the book.

But, as with the original, this Jeeves and Wooster episode excells most of all because of the impact it has on the reader. I was reading it during a week at work which held a couple of horrors for me. I read it on the way in in the morning, and it blew all worry clean out of my mind.

It put a smile on my face, and kept it there for hours afterwards. I’m smiling now as I type this, just thinking about it. It made the world an entirely more fun place. It’s not overstating it to say that it changed my outlook and my approach to the world.

Which is exactly why Wodehouse is brilliant. It’s not just whimsical. It’s life changing. Utterly. For me anyway. It’s why I gave Wodehouse my first ever 10 GBR way back when.

But, can I bring myself to give a 10 GBR to a guy who’s simply imitating Wodehouse, however perfectly? Can I give a top dollar score to someone who didn’t create the world about which he writes?

You bet your right hand I can. For me, books should be judged on whether you enjoy them or not; whether they change the way you look at things. Nothing else. Analysis of the writer, of the genesis of the story, of the risks taken, all that jazz is fun to speak about. But the bottom line score is about one thing and one thing only – is this a book worth having in your life. And yes, yes it is.