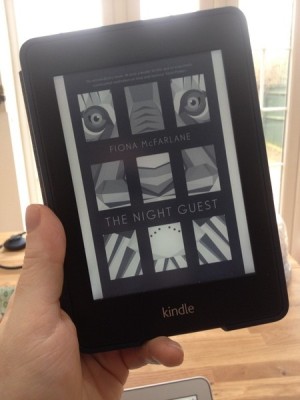 The Night Guest by Fiona McFarlane (Sceptre: Jan 2014) Ruth is an elderly widow living by the sea, convinced a tiger is roaming around her living room at night time. Of course she knows this can’t be real, but she also knows it is. Or is it? Into which confusing state of play walks Frida, “sent by the government” to help Ruth in her old age. High jinks don’t quite ensue, but Frida brings at least as much colour and mystery as the tiger.

You guys know me. I’m not shy of a bit of high writing. Of a bit of painful artiness. I can slip into being a pretentious twit with the best of em. In fact, sometimes I positively seek it out. Remember my Russian literature phase. For a few months there, I rode my commute with Dostoyevsky, Tolstoy and Turgenev, convinced I looked cool rather than just a try-hard jerk. (I did not look cool. Well, at least no more cool than usual.)

My point is, my tolerance levels for pretentious writing is north of the middling. This book stretched my limits though. And it’s difficult to explain why without tripping over a few spoilers. I’ll try my best though.

Concept and theme are pretty engaging here. A widow struggling with the isolation of old age, working her way through reality and the increasing tricksiness of her brain. Being scared by the tiger that roams her house at night, whilst at the same time knowing it’s probably not real. Drop in a mysterious “helper” as if from nowhere, and there are enough ingredients for a high concept plot.

And no doubt, McFarlane paces it incredibly well. Revelations happen in the right places. Character arc is shown rather than stated. The writing is crisp and clear. All that jazz is hunky dory.

But it should have been hunkier and dorier.

I was excited by this, but it failed to live up to that excitement. And the main reason was the flights of fancy it embarked on when McFarlane was busy blurring the lines between the real world and the increasingly confused world of old age.

In trying to bring us as close as possible to the experience of Ruth, McFarlane ended up simply confusing the issue, and asking a little too much of the reader. It was disorienting and surreal, but instead of that atmosphere adding to the book, it simply stopped it packing the gut-punch it should have. There is big emotion here, but too much of it is implied softly between confusing lines, and too much of it comes all at once in the last act.

So what we end up with is a perfectly fine book, with a healthy amount of originality about it (apart from the lazy use of the increasingly over-exposed tiger), held back from reaching the heights it could have by too much subtlety blocking the drama. Too much careful, artsy writing.

Worth a read, I’d say, but don’t expect this to make your favourite books of the year list. Which is a tough thing to say, because this has been lauded by others, and will likely end up winning a bunch of prizes. Just not GBR prizes.

Next week, another review of a book, obviously.