Transatlantic - skills to pay the bills 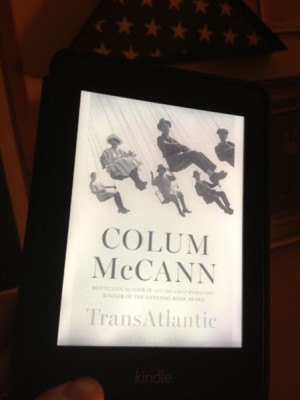 Transatlantic by Colum McCann (Bloomsbury Publishing: 2013) A Man Booker Prize Longlister, spanning four generations of stories about lives on either side of the Atlantic. The first transatlantic flight, Frederick Douglass’ trip to Ireland, a US ice farm, and the Good Friday Peace agreement all feature as McCann weaves a subtle thread of narrative between them all.

First things first, sad to hear about Elmore Leonard. He wouldn’t want us to go on about it though. So much hooptedoodle. So I won’t. Just sad, is all.

Second things second, Transatlantic. I basically picked it up because it’d been longlisted for the Man Booker Prize, which is dumb. You should pick books up because you’re enthused by them from the get go, not simply because they’ve been deemed possibly prizeworthy. But I did, so let’s move on.

This is fairly thin in the conceptual department, with McCann looking to make up in style and execution what it’s lacking in plot. He drifts from scene to scene quietly, lots of pauses and silences, hardly any dialogue, little warmth. But the intimacy he achieves is certainly riveting, and about every twenty pages or so he turns a phrase over that stuns you – a simile or juxtaposition or observation that’s so neatly and originally put that you are in no doubt you’re in the presence of a keenly accomplished storyteller.

My opinion of Transatlantic changed slowly as the book moved on as well. I spent the longest time spitting at what I thought was a disparate collection of stories, slammed together on the same pages only by virtue of an uninspiring theme. Then I got a bit lost in each individual story, and started connecting with the deep character portrayals McCann achieved. By the time I remembered to care about structure again, I could see what he was doing, building an entire tree worth of branches and twigs around the female line of a central family.

But is that OK? Is it cool to only see the point of a book when you’re a handful of pages from the end? When an incredibly cool cat does it, then it works. Steinbeck can be all mysterious and metaphorical for as long as he wants before making his point, and you don’t care because he’s a guy that can break the rules with the impunity of greatness. But can McCann do it as well?

Well, sort of. He has just about enough skills to pay the bills. Enough talent to keep shifting you from world to world, from generation to generation, from character to character, only really vaguely hinting how it all fits together.

A quiet read, full of atmosphere and occasional flashes of lyrical brilliance, which are needed to keep you on the page until the point of it all pops up to say hello.

Seems the Man Booker dudes are into their atmospheric novels this year. The only other two I read are of the same ilk. My money’s still on Harvest though.

Next week, a preview of something coming out in Oct. Because I’m linked in and that.