Lionel Asbo - not what you think 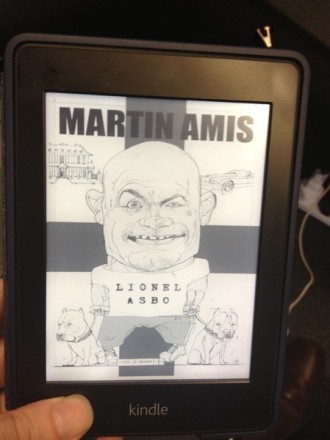 Lionel Asbo: State of England by Martin Amis (Vintage: 2013) Lionel changed his name to Asbo after becoming the youngest person to ever receive one. And so the pattern of his life became set. His most important relationship is with his more introspective, sensitive nephew Desmond, to whom Lionel is somewhat of a father figure. When Lionel comes into some serious money, life changes. Throw in a festering secret Desmond has been keeping from his uncle, and you can feel a spectacular finale coming on.

After the dramatic but essentially cosy England of Agatha Christie last week, I thought a jolt of the modern was needed. And societal critique doesn’t come more on the money than a book based around a character who changed his name to Asbo. (For the Yankees amongst you, an asbo is an “anti-social behaviour order”, slapped on you by the powers that be for being a jerk).

What’s more, I’ve been meaning to read some Martin Amis for a while, since that font of all things cultural (and the source of most of my mimicked pretentiousness) BBC Radio 4’s Front Row interviewed him. So in I dove.

What I got was something altogether more complex and richer than I expected. I thought I’d get, in the main, a bunch of shock scenes and I-can’t-believe-there’s-people-like-that moments. A bit of a Gypsy Wedding fest. And that’s here, of course. There are cartoonish moments, and there are altogether darker ones. Amis seems able to separate the two in his representation, the reader never in any doubt which bits he’s hamming up and which bits he’s including as an indictment on society.

But this is more than just a reality TV show in book form. In the creation of Desmond, Dawn, Grace, and a handful of other slightly out of place characters, Amis shows more than the odd flash of sentimentality.

There’s a huge amount of fragility and redemption in amongst the otherwise desperate community. Even Lionel has extended periods of thoughtful philosophizing. Sure, he’s violent and ridiculous, but he’s also self-aware and equipped to deconstruct the patterns of his life. Amis doesn’t just show this semi-imagined/semi-real slice of society, stand back, point a finger, and shout “look how funny they are!” He does a lot more than that, whilst never going too far in the other direction and making this into a sermon.

Part of this is achieved by Amis’ decision to focus on a range of different characters, giving the book a busy feel, and giving him opportunity to go at the world from different directions. But part of it was achieved by his writing as well. It’s imaginative. It hasn’t just fallen out of his head and onto the page – there’s a huge amount of work gone into making sure each section has the right form, the right syntax; enough art to make it more than simply words, but not so much as to make it meaningless.

There were sections which brought that breathless feeling back. There’s a birth (I’m not giving too much away by saying so, promise), and the way it’s penned is beautiful. It’s simple. And it shines out, laden with emotion without the puff.

For all that, though, if you’ve raced to the end, you’ll see this didn’t get a 10GBR. And why not?

Well, honestly, all that stuff I just told you – the beautiful writing, the rich plotting, the great characters – I didn’t really start noticing any of it until about half way through. I get that a book needs to be set up. I get that the writer needs to lead you in. I get that there needs to be a pace, and you can’t just jump straight in the deep end. And I’d usually live with all that, if it wasn’t for just how hands-down brilliant this book ended up being.

It’s a tough criticism, but those 10GBRs live in a high place!

A couple in a row, and another for the hall of fame. We’re on a pretty good run at the moment.

Next week, I don’t know, but in the words of Mr Brown, it’s got to be funky!