How to be Both - quirks that work 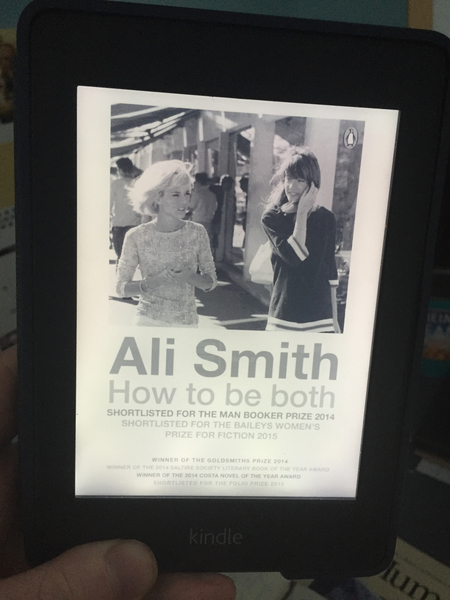 How to be Both by Ali Smith (Hamish Hamilton: 2014) A book in two halves, one in the modern-day following a girl who recently lost her mother, the other during the Renaissance following the twisting life of a great female painter.

Books with a quirk are usually to be avoided. When the worth of a book is staked on a novel trick or new structure, the trick can end up taking over. All the usual traits of a good novel – structure, language, pace, characterisation, all that jazz – are in danger of becoming ignored ot becoming secondary to the shiny new toy.

How to be Both has a quirk. But it’s also brilliant.

The quirk is that you can choose which half to read first. In the kindle version, you just choose. In the printed version, half the print run has been done in one order, and the other half in the other. The result is a slightly different experience, depending on the order you go for. The two stories overlap and tread on each others toes, but you experience and interpret those touch point differently depending on the order in which you read it.

Which is so many good biscuits. It’s an interesting idea, and one that gives life to a feeling of exploration, not to mention space for subtly different interpretations. But the quirk, on its own, would rust pretty quick.

The reason this book is so good is because it’s written by a writer with a wheelie-bin full of talent. Smith may have conceived of a novel trick to give the story a different dimension, but she’s also hard at work creating all the other usual fireworks too.

Character is key. There are two here (one in each half) who grab your heart and your funny bone, and hammer at each to good effect. Smith puts in all the ground work needed to develop connection, peppers in pathos and humour, navigates the arc like she’s got Google maps, and you end up head over heels for both protagonists. Or at least I did.

If there’s a weakness, it’s the complete distance between the two stories that the two-half composition creates. I couldn't shake the feeling that I might have enjoyed it more if the two halves were intermingled. Too often, when making my way through the second half, I ached to flick back and join the dots between the two.

Maybe that’s part of the point. Maybe I was supposed to throw myself fully into one story, and then the other, and not have my commitment torn in two by constantly switching. But I can’t help but think that, if more intertwined, the two stories would have gained more relevance and even more powerful meaning.

I’m no nit-picker though. I really enjoyed reading this. Just enough for a...

Bang back to form after last week’s averageness.

Next week, something a bit avant-garde. I bet you can’t wait.