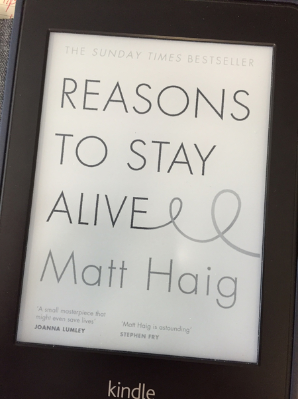 Reasons to Stay Alive by Matt Haig (Cannongate: 2015). An account of Haig’s battle with depression and anxiety throughout his adult life.

That’s not much of a description, right? An account of Haig’s battle with depression and anxiety. I added throughout his adult life just so it didn’t seem so pitifully short. And it still sort of does.

I feel bad about it, because I do not want to short-change this book. I feel bad about it because it sounds bland and not the kind of thing you want to read if you’re anywhere near a bad mood. It makes it sound like a moan of a book.

But this is not that. This is perhaps the most hopeful and soul enriching book I’ve read in the last ten years. I can’t think of a book that made me feel so good.

It’s a one-two combination. It’s a perfect assault. The first part is the material itself. Haig talks about his struggles in a way that is structured in parts like a story and in parts like a therapy session. He includes material which is intensely personal and revealing. It is a fascinating account of one man’s mental health history. And it is not narcissistic. It could be, but it is not. It is not indulgent, nor at any stage is it an overblown woe is me splurge. It’s relatable (wherever you are on the spectrum, you can identify with some aspect of Haig’s struggles in here).

And the second punch is the writing. Haig is fast becoming one of my favourite writers. And I mean writers. There are people whose books you like, and then there are people who write in such a way that you just melt under it. Under the weight of their talent. It’s pleasing in a way that defies description. It’s rich and it’s touching and it’s raw and it’s a bunch of other words that come no-where near to justifying how it makes you feel.

It’s wondrous that Haig has applied his writing talent to such an important subject.

And it’s wondrous that such an important subject has Haig’s writing talent at its beck and call.

A one-two combination Rocky would be proud of.

That hall of fame is starting to stock up quite nicely for 2016.