All that man is - totally fine 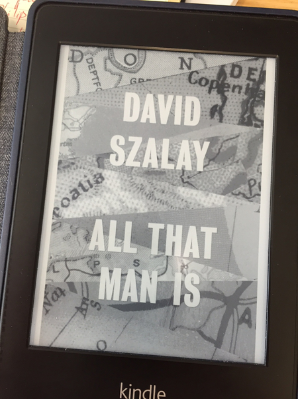 All That Man is by David Szalay (Jonathan Cape: 2016). A series of studies of men at various stages of life and in an array of interesting situations, each revealing something provoking about what it means to be male and alive today.

When the Man Booker long-list was revealed and this was on it, I was happy. It’s a good book, and I’d read it, so I could profess to have at least one finger lightly pressing on the literary pulse.

And I can see every inch of why it was short listed. It does what agents and publishers want all of their writers to do; it taps into something. It taps into an increasingly loud discourse over the meaning of male identity in modern life. It explores some of the distinct themes many men struggle with today. It confronts loneliness. It battles with the problems of ego. It portrays aimlessness and lack of direction. It shows frustrated characters clambering for their goals, as well as characters with little purpose and equally little joy.

And it does all of this in a very readable way. Szalay can write, no doubt. He can construct a story and a cast. He can inject the odd but of colour where it’s needed. He knows what he’s doing, and that comes across.

But I bet you can see what’s coming here. What’s coming is the down side of the equation. The balancing out. And it comes in the form of a lack of explosion. This book is (for me, anyway) just too quiet to really grab the big scores.

And I’ not talking about thriller-country. You know me well enough by now, I hope, to know that I can be knocked backwards by all sorts of bullets. They needn’t be loud, they just need to make you feel. To make your mind race.

For all it’s cleverness, for all it’s astute observation,s for all the lessons and lights Szalay is shining in these stories, I was never really struck. No revelation. No meat the kind of which makes you ravenous for more. It did what it says it’ll do, and not much more.

Which is a crappy criticism. It’s given in full awareness that not everything can explode. It’s given while accepting that this is a perfectly entertaining and worthy book.

I’d recommend it, but I wouldn’t shout about it from the rooftops.