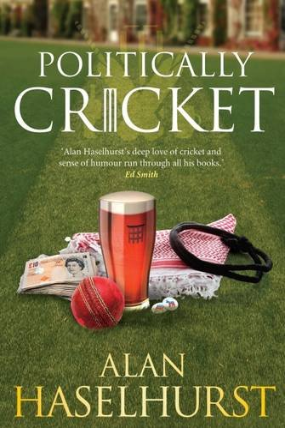 Politically Cricket (The Professional & Higher Partnership: 2016). A band of part-time cricketers and general reprobates undertakes to put on a charity match with the Lords and Commons Cricket Club. Throw in some visiting Americans, a scurrilous gossip journalist, an Arabian delegation, and more high jinx than you can shake a stick at, and we have ourselves another adventure.

Same disclosure as when I reviewed Fatally Cricket in 2013 – Alan Haselhurst is my father-in-law. I continue to think that shouldn’t disqualify him from the Gav’s Book Reviews spotlight though. Not his fault his daughter married me, right?

Disclosure done, on with the match.

I heard an interesting thing yesterday. The Rangers manager (sorry for the detour into Scottish football) has been criticized for only having one plan. One way to win games, and if it doesn’t work, then he’s up the creek. He’s been told he should have a plan-B when plan-A doesn’t work. His response was to tell people to rod off. Instead of a plan-B, he reckons you should just “do plan-A better.”

Which is neat. I like it. Don’t throw your toys in and try something different. Stay the course, but do it better.

This is the seventh tome filled with the adventures of the Outcasts Cricket Club. That’s a tough gig. To fill seven books with the same cast of characters and the same stage, but keep it fresh and entertaining. But Alan only goes and does it. He’s picked up plan-A again, and he’s done it better.

The biggest step change for me was the range of tools on display. The series has always evoked a strong sense of place and feeling. It’s relied a lot on the world Alan had created – on the nostalgia and longing we all have to spend sunny afternoons on green lawns with a beer in our hands.

But this time, there’s more to the game, more shots in the arsenal. There are flourishes of a more wry sense of humour. The pacing of the plot twists was more precisely on beat. The scene shifts, the irony, the subplots; they all just seemed that much sharper. Plan-A, but better.

The pace is breathless, but every now and then, a bit of depth is introduced too. Jimmy Noakes in particular (a new MP and driving force in the first couple of acts) interested me. He’s introduced with insight and delicacy. He’s a different animal to the supporting cast of other Outcast novels. The demands of the genre are such that pace must be maintained, and complete characterization is often a necessary sacrifice. In Jimmy Noakes though, we see a few green shoots of a more rounded exploration of character. Just green shoots, mind you, not full-blown flora. To do complete justice to Jimmy Noakes would take a different genre of book. But it’s there, all the same.

And sure, there’s the usual stuff too. There’s the Wodehousian names which I defy you not to chuckle at. There is ridiculous farce of the best kind. There’s a plot which drives you forward at light-speed. There’s that warming sense of place and theme. All that stuff.

Like I say, I know the author, am related to him. But, hand on heart, I forgot he was driving the pen forward most of the time. It’s a complete world, a complete escape. And seventh time around, it’s only getting better.

Plan-A is all right by me.

Next week, something else, probably not written by a relative.