A Christmas Carol - no Muppets in sight 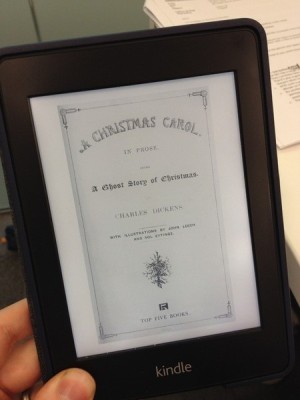 A Christmas Carol by Charles Dickens (Chapman & Hall: 1843) You know the drill. Old Scrooge McDuck, um, I mean, Ebenezer Scrooge, hates Christmas and all things cheery. He’s visited by 3 ghosts, all of whom try to shock him into being a better chap. But will it be enough to turn this paragon of grumpiness around and get him to celebrate Christmas with a skip and a wink? (Spoiler alert: it is).

We at GBR take pride in having our finger on the pulse. Ahead of the headlines, that’s our motto.

Well, no, that’s not our motto. One of the things that makes books plain brilliant is that when a writer hits all the gophers square on the head, what comes out can be timeless.

So it’s with no apology that GBR focusses every now and then on an oldie. The fact I’m doing a Christmas book a week and a half after the big day itself is a bit shameful though. In my defence, I was reading this on Christmas itself, and then got distracted by the GBRYIR, and then mountains food, and then more gin than I could shake a stick at.

A Christmas Carol has been parodied and sent up more times than your mum. The danger is that the parodies overtake the original. For the first half of the book, I had to make a conscious effort not to imagine Scrooge as Michael Caine, and all the other cast as Muppets. I came across one of the illustrations of Bob Cratchit and was weirded out that he didn’t look like Kermit.

But giving the original a read is well worth it. For starts, it motors along. None of the long drawn out scene setting which makes a lot of old classics a struggle. It’s a short-ish read, and Dickens packs a lot of action in.

Then there’s the humour. I assumed the Muppets added most of the gags, but Dickens cracked wise too. This is the guy who penned the Pickwick Papers after all. He has a keen sense of the absurd, and he sprinkles it in here to keep things light.

But for me, most powerful was the arc of it all. In most TV adaptations, I never leapt with joy at the rehabilitation of Scrooge. You know it’s coming a mile off, and when it arrives, it’s kind of pleasant, but not much more.

But with the original, I grinned wide when things started going well. I felt genuine relief for the man, and a sort of cheesy happiness at all things Christmas. Part of this is because it’s Dickens’ story, and no-one tells it like him. And part of it is because it’s easier to pace a book with more emotion than with TV. The medium is just better set up to illicit real empathy (when it’s done well, of course).

It wasn’t without its drawbacks though. It held no surprises in plotting, obviously. The theme and concept, while probably more shiny and new at the time, are the stuff of so many Tim Allen films nowadays. It still felt more parable than true life tale, and some of the supporting cast are too one dimensional (supporting cast are supposed to be of course, but there are limits. Scrooge’s nephew for example is particularly thin, and kind of an idiot). Some of the language and phrasing also gets a bit sticky to wade through (occupational hazard for a hundred and fifty year-old book, I guess).

It’s great, obviously, but stops short of an 8 or 9 because mainly because of its age and over-familiarity. The resultant slight awkwardness of prose and structure hampered a real rollicking score. None of that Dickens’ fault of course, but we score on enjoyment and not reputation around these parts.

One thing about judging classics, it makes you feel like a jerk. Who am I to judge Dickens? How can a story that’s lasted so long be reduced to an out of ten score? Then again, no book should be placed on so high a pedestal or taken so seriously that it’s beyond criticism. After all, it’s just reading, right?

Next week, I’m not so sure. I’m in the middle of a biggie. Hopefully I can finish it in time!