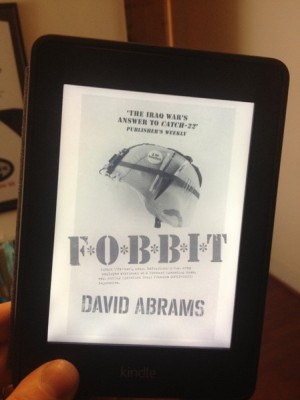 Fobbit by David Abrams (Harvil Secker: 2013) Set in Forward Operating Base Triumph in Baghdad, Abrams invents a cast of characters to help him explore the Iraq War. From the soldiers whose war is spent in an office cubicle, to those whose incompetence in the field costs lives, Abrams portrays a war punctuated by mistakes and bureaucracy.

Wacky war books. There’s a whole tradition here, with Catch-22 and Slaughterhouse 5 at the top of the tree. Fobbit has been held out as the Iraq War’s offering up to this tradition, which is a tough billing.

I’ve got to assume being compared from the get-go to all-time classics makes a writer flattered and terrified. No way are you ever going to live up to those guys, right? No way will anyone expecting another Catch-22 or Slaughterhouse 5 be anything other than disappointed, right? I mean, those things come along once in a blue moon. They will still be on shelves in five hundred years (assuming we still have book shelves in five hundred years, Amazon).

So I approached Fobbit carefully. I wasn’t going to fall into the trap they wanted me to. I wasn’t going to expect to have my socks blown off like they were when I read those luminaries of the wacky war novel tradition. I hoped, of course, but I didn’t wade in expectantly. I wanted to give Abrams at least a bit of a chance.

And he didn’t waste it. There’s a bunch to like in this book. For starts, it swims in a pool not many other war books do. Not the front line for this guy. Most of the happenings happen in the Forward Operating Base (hence Fobbit, obvs), which is a kind of back office to the front line. Most of the characters are pen pushers. Those that are bone fide soldiers are pretty incompetent. There’s maybe one admirable soldier in the leading cast.

All of which is to say it’s kind of a fresh perspective (or as fresh a perspective as can be applied to a war book). Which is fun.

There’s also the wonderful dichotomy all wacky war books feast on. The idea that war is so terrible it’s hilarious. In the foreground are ridiculous characters with spontaneous nose bleeds, delusional emails to doting mothers, and hording of care packages. And in the background is the constant terror of real war.

Which is where it starts to stumble, if only a little. The wacky isn’t quite wacky enough, and the terror isn’t quite terrifying enough. Sure it’s there, but I didn’t laugh enough at the cartoons, nor did I feel uncomfortable enough at the realities. Dresden this aint.

For me, war novels (wacky or otherwise) need to have a sense of the ungraspable to really hit the target. I need to get pushed by them; need the story and the feeling being related to be so important I can’t hold it all in my head at the same time.

Fobbit lives more in the safe zone though. No doubt, there are sections which come brimming with feeling. But they’re too few, and they come up too predictably, unmasked by enough comedy camouflage. No Yossarian. No Tramalfadorians. Funny and sad and all that jazz, but not reaching the heights that can be reached.

Which is harsh. I’m doing what I promised I wouldn’t. I’m holding Fobbit up to Catch-22 standards.

Let’s put it this way. When Mrs GBR makes a cake, it’s double delicious. When (if...) I make a cake, using all the same stuff, it’s just OK.

Worth reading. Very good, but maybe just on the shelf below the all time classics.

Next week, I may have accidently started reading a YA novel. I think.