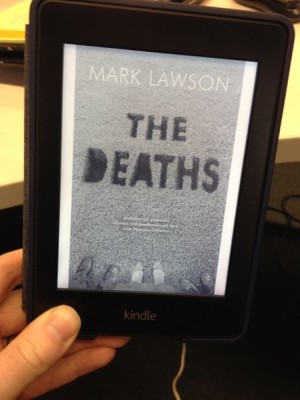 The Deaths by Mark Lawson (Picador: 2013) There’s been some deaths, and four sets of couples are involved somehow. From that leaping off point, Lawson explores the lives of the haves in a world of have-nots, and exposes some of the neuroses and closet-dwelling skeletons behind the well-pointed facades.

John Lanchester did a book (for books are “done” more than they’re “written”, I reck) called Capital earlier in the year. To his immense delight (I’m sure) it got an OK write-up on GBR. The meat for his plot-grinder was, in large part, the increasing gap between the rich and poor, brought into sharp focus by a frightening “we want what you have” stunt.

So when I picked up The Deaths, I was sceptical. Lawson also promises to explore the modern rich/poor divide. He also wants to shine his creative light on the increasingly insecure rich-ers (as I like to call them). He also wants to erupt some plot-bombs in otherwise seemingly cosy lives. I worried, as you may have guessed, that’d I’d read this book already.

But I love Mark Lawson (from such things as Front Row). And I love stories which include a death mystery or two. So I jumped in.

I’m glad I did. Lawson is a pretty sharp cat. On the surface, this is a pedestrian story of the lives of some rich, middle-aged dudes and dudettes. But it’s far from a pedestrian read. He uses a couple of tricks in the structure to keep you on your toes and insert some mystery. He deftly drops in plenty of character back-story to build their weight. His dialogue is lively and interesting, even if it rarely seems to have real purpose behind it. And he does a great job of building to that all important crescendo.

It’s like the bulk of the book is filler, much of which trends on familiar John-Lanchester-esque ground, but Lawson is good enough to make the filler fun.

Most of the time, when you put the book down, you realise you’ve just spent half an hour learning about the latest winter holiday, or shooting outing, or dinner party of an elite set. Sure, there are undercurrents and hints towards bigger storylines, but you spend most of your time on mundane scenes which Lawson makes entertaining through the weight of talent and not much else.

And it's not just the plot. The theme and meaning aren't that startling either - it’s in the “mission” of the book that Lawson most obviously trips over the turf that Capital dug up. Even the major twists of the plot don’t seem to matter a huge amount.

But what does matter (harping back to my own well-trodden theme – that books should be enjoyable first and foremost) is that I had fun reading this.

I enjoyed this book because Mark Lawson is fun to listen to. I enjoyed it because he has a way with words, a keen sense of observation, and the discipline to structure a story well. That the story had been done before hardly seemed to matter.

Now all Lawson needs is a story to match his talent, and he could aspire to a 9 GBR or even a 10 GBR, which I assume is what he’s gearing his career towards.

Next week, something a bit murdery.