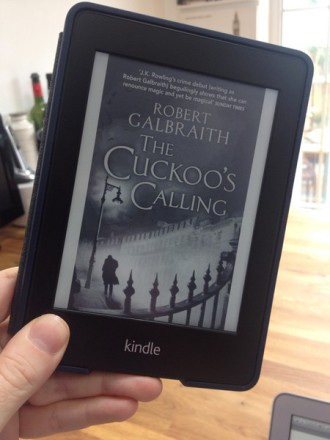 The Cuckoo’s Calling by Robert Galbraith (Sphere: 2013) Except it’s not Robert Galbraith, it’s J.K. Rowling using a pseudonym. You knew that, right? Everyone knows that. This is a detective story where down-and-out private eye Cormoran Strike is handed a life-line by landing a new case and a new assistant on the same day. Whilst reinvestigating the apparent suicide of a young supermodel, Strike pieces his own life back together along the way.

I wang on about artful writing on here a bunch. About how it gets my blood pumping. About how the books I love mostly have beautiful language in them; carefully chosen words assembled with grace and given a tempo that carries me away. But there’s a lot to be said for good old fashioned expert story telling too.

That’s what Rowling is good at. I mean, obviously, she’s good at a bunch of stuff – no one is as insanely successful as her ithout having a full set of strings to her bow. But putting together a plot, creating scenes to carry it along at just the right pace, and populating it with characters that are as real as they come; that’s where Rowling crushes her biggest bananas.

I got a taste of it in the Casual Vacancy, and it’s here again in Cuckoo’s Calling. It’s a big book, 500+ pages. But it blurs by like few other books of that length do. Rowling has such a Jedi sense for the reader experience that she carries you along with bursts and pauses and revelations and emotions all dropped in at the right spots.

Obviously, with this, she’s trying her hand at a different genre. In the flawed hero and eager assistant, she’s used a familiar trope. But she does it so goddamn well that you don’t feel short changed. Someone else, given the same characters and the same story, could easily churn out something quite flat, but Rowling uses all three dimensions and fills them out so well that you see past the stereotypes and start living in her world.

So good story telling, well paced, interesting characters expertly built, this book is all of that. And I enjoyed it because of those things. But at no point did it blow me away. At no point did I get properly excited or breathless or sad or whatever. It felt like a kind of fun but fairly gentle read.

There were a few elbows and knees, also. A few places where the crime thriller nature of things turned stuff a bit cheesy. And I spoiled it a little by guessing the answer early on, depriving myself the revelation moment.

Where does that leave us? A storytelling great, a book so well put together you don’t notice it flying by, and a skill that took you past the pitfalls of stereotype. But, for all that, no fireworks.

Sounds about right. Probably like six and three quarters if I was in to fractions. But I’m not.

Next week, a debut, if I finish it in time.