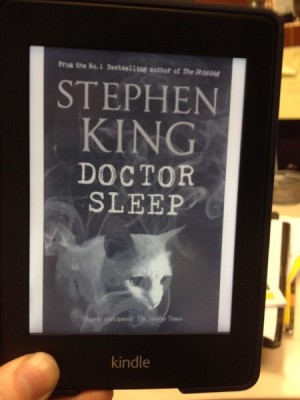 Doctor Sleep by Stephen King (Hodder & Stoughton: 2013) King’s sequel to The Shining sees Danny all grown up and off the rails, only to find them again right when he needs to. When a teenage girl with the shining gets in trouble with some spooks high on “steam”, enter Doctor Sleep to the rescue.

I read (or started to read and then lost the book) a tome about story engineering a little while ago. The guy who wrote it had a complete hard on for Stephen King. He said in practically every paragraph that only Stephen King, with his immense genius and God-given gifts, can get away with writing a book without planning it. Only Stephen King, with his innate wisdom and rock hard abs, can just make stuff up on the spot and still have it fall out of his head in a blockbuster format. The rest of us, so the book went, need to think hard about structuring, theme, character, etc.

I’m not sure that guy had read Doctor Sleep when he wrote his contribution to Stephen King hero worship. I’m guessing no.

For this was a giant felled, in my probably flawed opinion. I loved the Shining. I read Misery too, and loved that. I did not love Doctor Sleep.

For startsies, there were cringe-worthy moments of character interplay every time more than one person was on the page at the same time. The dialogue was clumsy, often using the kind of wit you expect from a badly written soap opera (aren’t they all badly written?). Lifelong friendships seemed formed in an instant, and pretty much every character seemed entirely absorbed in their own worthiness. That guy who wrote the story engineering book would probably call them two-dimensional characters, but I’m not sure I’d be that harsh (I totally would).

But the story, and the scary, right? That’s what King dines out on. Plot and horror. Well, the plot felt a little (though not a lot) contrived. The big bad didn’t seem all that big and bad either. Sure, they get up to some gruesome stuff, but they also seem a little cartoonish at times, and it’s difficult to get really scared (or even disturbed) by a caricature.

All that said, I did always want to know what was on the next page. Not quite a book I couldn’t put down, but a book I would have been annoyed at not finishing. I wanted to know how it worked out. Which means the structure must have been there or there abouts.

That’s the most I can say for this. Honestly, if you’re a fan of King’s writing, give this a wide berth, or be prepared to have your golden memories spoiled.

Breaking up a run of good ‘uns. Nice one Steve. I hope you’re proud.

Next week, I’m away again, so not sure I’ll get a post up. But then again I might. I guess it’s a mystery…