TO RISE AGAIN AT A DECENT HOUR - PUTTY 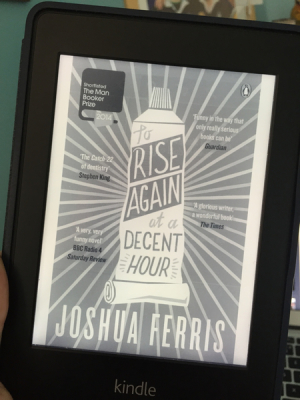 To Rise Again at a Decent Hour by Joshua Ferris (Viking/Penguin: 2014) A dentist who’s got all sorts of issues with the real world is targeted by an out-there religious sect, whose teachings start to make more an more sense.

Balance is huge, is pretty much everything. Judging just the right amount of yin and the right amount of yang to put into stuff, anything, is a life skill. Talk about work, family, character, love, humour, culture… you name the thing and balance is right there in the forefront of “getting it right.” Not too obsessive, but not too uncaring. Not too weird but not too boring. Not too present but not too absent. Balance balance balance.

It’s something Ferris gets bang on. He’s got this skill in balancing meaning with humour. He wraps up such profound, BIG thoughts within entertaining, quirky environments that the resultant punch lands home with real impact.

There are huge themes at play, and a slightly manic, obsessive protagonist. The voice is so damn distinct, and there are enough “oh, yeah, I think that too” moments that you end up identifying with this weirdo in a way you wouldn’t have thought possible. He’s funny and ranty, but then there’s this edge that he’s constantly standing on, with mega trouble and meaning-of-life stuff right there on the other side of it.

Ferris keeps you suspended between entertained and provoked expertly. I felt like putty in the guy’s hands. Each page had me either glued to this guy’s thought processes, amused by the situations he was creating, or having to breathe at the life questions screaming between the lines.

One nit to pick? The plot was kind of circular. I mean, it was interesting, and it mapped this guy’s spiral beautifully, with a pretty touching resolution, but I felt one or two plot elements were dipped into a couple times too many.

Pretty minor nit though. Doesn’t keep it from a

Get right on the hall of fame Ferris. That’s way better than a Booker Prize nomination, any day of the week.

Next time, a bit of a surreal one from an author I’ve heard a lot about but never picked up.