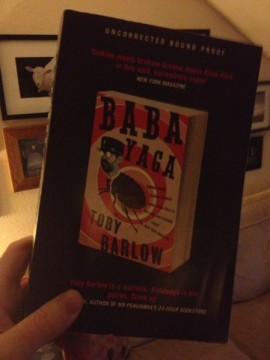 Crumbs. I really don’t know where to start. This book packed so bloody much in – I finished it a few days ago and my head is still spinning. There’s just so much story here. Never mind all the jazz that’s happening front and centre, there’s back story galore as well. And not boring, through hazy memory beams, “I used to be a contender” type of back stories. Rich, meaningful, surprising back stories.

Just thinking about the plot gives me a headache. No doubt, this is a high concept novel. It seems like Barlow makes a decision on every page to take another turn. The result is a book that gets you (and keeps you) hooked, a junkie for the next plot development. And his imagination makes sure they keep coming and they keep interesting.

There are touches of Gaiman about Barlow. The story is a bit magical. There are the same sorts of central, sympathetic characters to hang on to, and a similar cast of eccentrics floating around them to keep things weird. And there’s so much bloody STORY that it’s all you can do to keep up.

But Gaiman he aint. Sure, I was hooked. And yip, the characters are deep and entertaining. But with so much going on, Barlow neglects the writing a little bit. I like to be knocked down by the odd bit of prose. I enjoy a bit of lyrical showing off. Some imagery that makes you hold your breath. Even purposefully stripped bare writing will get my heart racing. Gaiman can do it. But it seems Barlow spent all his time on his story and less time on his voice.

And sure, I know a writer’s voice is the last thing you’re supposed to notice in a good novel; that a writer is supposed to stay in the background, secondary to the majesty of the story itself. But that doesn’t mean the way you tell a story isn’t important. Barlow’s clearly got a jumbo jet imagination, but at no point was that creativity pointed in the direction of his language.

It’s a harsh thing to get hung up on. Barlow’s spinning so many plates at the same time in this book, and it’s a breathless read. It’s a great story, and one which he’s layered with so many different tangents. Concept, scene execution, character depth… all top notch. But unless you’ve got the rock star writing powers as well, you’re not going to get the daddy GBR scores.

Good book. Go read it. But maybe don’t save it up for the big holiday read – keep Gaiman for that.

Next week, um, well I might be moving house, so I’ll try not to leave you hanging, but I promise nothing.