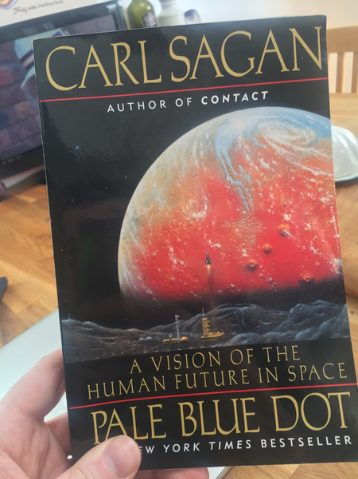 Pale Blue Dot by Carl Sagan (Random House: 1994). The don of all the celebrity astronomers plots the course of human space exploration, and delivers his vision of where we could go next (and why).

Pale Blue Dot is a picture. It’s also a book by Carl Sagan. He didn’t nick it or anything. It was he who coined the phrase and was largely responsible for the picture in the first place. So fair do’s

I’m a fan of the picture. It’s on the wall in our house. And so I figured I should give the book a go.

Sagan was playing with fire a bit here. The picture says it all for me. The whole sentiment and emotion it evokes, it’s done pretty perfectly. But when when you start surrounding the image with words, start describing the sentiment, then it’s dicey stuff. Part of me thinks just leave it alone.

Good ole Carl though, he knew his beans, and he’d plotted a course he hoped would avoid this trap. Right up front, he explains what he sees and thinks when he looks at the photo. He does it in the first few pages. Then he moves on. He doesn’t dwell on the picture. He moves beyond it.

He throws detail and facts and learning at you, explaining exactly why we should be in awe of space and the galaxy and the people whose lives are dedicated to understanding it. Then, once he’s thrown that at you, he throws imagination and inspiration and optimism out, explaining the wonders that could lie ahead and the course human history could take.

So it ends up being a book of two halves. The first is detail and science. The second is imagining the future.

It was the second half I’d signed up to though. To get there, I had to wade through big sections of dense stuff. No doubt, Sagan writes with feeling, but his skills didn’t quite save that first half for me. There’s only so much oomph you can give to a blow-by-blow account of stuff we’ve found.

So yeah, he fell into the trap a bit. He left the awe behind. But he did come back to it. The second half was what I’d hoped it would be. Once Sagan lets himself off the leash, his vision comes through and you get that pay-off promised by the picture.

Give me just the second half of this, and I’d be a happy bunny. But I read it all, and so ended up a bunny who’d had an OK day but was by no means over the moon.

Next week, something thoughtful and French. Cos I’m high-brow.