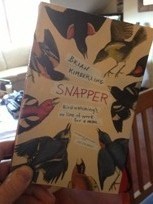 Snapper by Brian Kimberling (Tinder Press: 2013). Nathan Lochmeuller is a man without motivation, and essentially falls into a job tracking song birds in a square mile of Indiana forest. He enjoys it, whilst his life and the world change around him. The novel skips between his youth, his adolescence and his grown-up years, all circling around the time he spends getting paid to watch birds.

You’re sitting with people you’ve grown up with, and you start reminiscing. Natural, right? You rehash conversations you’ve had fifty times, and you’re hilarious as you retell jokes only you guys get. It’s repetitive, but it’s comforting and indulgent. And, most importantly, you’re hilarious.

Then someone else enters the group. Some third party, unaware of how hilarious you are. You instantly get highly self aware. You glance at the cuckoo and realise how all this must sound through their ears. Boring. Irrelevant. If nothing else, you’re definitely not as funny as you thought you were.

Shared experience is fun to retread purely because it’s shared. The cuckoo wasn’t there though. To them, that time your mate got drunk and cut his hand is not the pinnacle of comedic endeavour. It’s dumb. I give you exactly ten minutes before the cuckoo’s eyes glaze over and they start planning an escape route.

That’s you and me though. That’s normal people. Brian Kimberling though – he’s a writer, and a pretty good one. He spreads out over 200-odd pages the formative experiences of Nathan Lochmeuller’s life. His own childish and adolescent and adult anecdotes. On the face of it, they’re pretty unremarkable. Kimberling sits us down opposite him, buys us a pint, and recounts vignette after vignette of experience in a life lived in Indiana.

This right here, this is the magic of story-telling. In the real world situation, the only way to make the cuckoo feel more involved is to change the topic of conversation to something they can more relate to. In Snapper though, Kimberling ploughs on, rambling his way through the narrative, dragging you deeper and deeper into Indiana.

Course, it’s not magic. There’s method to it. There are courses and workshops and entire traditions which show you how to do it. Kimberling draws on all this, no doubt, but he’s an artist, and what he achieves is remarkable. He makes sure Nathan Lochmeuller is witty and likeable (albeit a bit of a loser). He makes sure to reveal a beautiful and ugly Indiana. But most importantly, Kimberling injects meaning into each little experience he relates.

He does it subtly, but there are signposts and careful exposition; just enough so you know you’re not just reading about stuff that happened to Nathan Lochmeuller. This isn’t just a novel-length explanation of his life to date. Rather, in amongst it all, you see a search for worth in the world. A man with paths to choose but no belief in any of them. The beauty of simplicity.

That’s what we’re doing wrong, down the pub, when there’s a cuckoo in the group and our stories are boring them. We’re failing to explore meaning-of-life type questions through our experience.

I knew I was doing something wrong.

A gorgeously written, warm novel. It didn’t blow me away, but it did make me stop and think.

Next week, something a bit heartbreaking (if the book’s preamble is anything to go by).