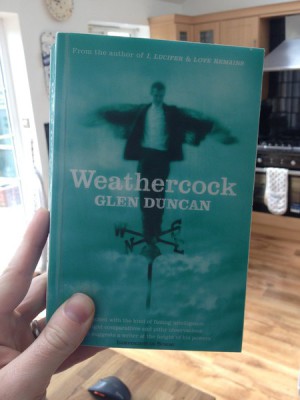 Weathercock by Glen Duncan (Scribner: 2003) The moral odyssey of a man who grows up knowing he has the capacity for huge evil, and grapples with it alongside his religious fear. In the battle for his soul, Dominic torments himself with the entire good v evil thing, and struggles to reconcile it all (understandably).

I’ve been super indulgent recently. I succumbed to a bit of Waugh a few weeks ago, and here I was again, pigging out on a little Glen Duncan.

In my defence, it’s been a while. It’s been even longer since I read one of his good books, the ones he flew with for years until he locked in on his werewolf series (of which the latest one is out now, by the way). Not that the werewolf stuff is bad, just that it’s not classic Duncan. It’s designed to pay the bills. But the stuff I fist fell in love with was his literary efforts. And this example of that Duncan genre has been staring at me from my bookshelf since brother GBR “lent” it to me years ago.

So what did I think about it? It was goddamn spectacular. Just plain inspirational. When he’s in this gear, Duncan writes with such raw energy and thought and beauty. I read it salivating the whole way.

He does all this through a mix of a bunch of skills. He balances the overt stuff and the between the lines stuff expertly. His thought and his observations are slick, his descriptions are packed full of lightbulb moments, and his feel for the senses is knock-out good. It’s up-there intelligent writing without being twattish.

And there’s plot too. Duncan, by his own admission, isn’t a plot driven guy. At least not in his pre-werewolf era. But there’s good plot here. Sure, it’s not what makes the book great, but it’s there all the same. And Duncan’s ability to imbue the plot with mind-blowing meaning gives the story the kind of punch that will leave you flat on the floor. At least, it left me flat on the floor in any case.

Duncan hasn't got a 10 before. Not even I, Lucifer. But with this, he goes right to the top of all the lists. Loved it, muchly.

Next week, some Amis, if I finish it in time.