The Shock of the Fall - Blubbing 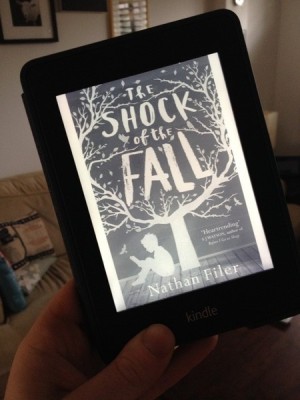 The Shock of the Fall by Nathan Filer (Harper Collins: 2013) A traumatic childhood experience leaves one brother dead and the other troubled. Written in the first person, this book follows the survivor as he works through his grief and his guilt, and tries to find a way to live with it all.

I had a meeting in Slough one day a few years ago (I hit all the high spots). I was reading a book on the train on the way there. The Kite Runner. I had to put it down a few minutes before the train arrived at the station. It was getting to me. I was getting all teary, and I was running a real danger of walking into the meeting blubbing, which probably wouldn’t have looked all that professional.

It was the most emotional a book has ever made me, but this guy came close. The sadness comes dripping off the pages, and it seems every phase of the book ends on an emotional pig-out. It comes with some pretty admirable writing as well. There are bundles of acutely observed, sensitive, delicate thoughts in here, incredibly well expressed. The voice of the narrator/protagonist is well achieved, and the language gives it a very natural feel.

But this book is no Kite Runner. No siree. And I’ll tell you for why.

Sure, it got me going. It got me page turning, keen to find out the full story that was being slowly revealed. But it did all this using some hack tricks There was plot teaser after plot teaser, clumsily inserted in an almost soap opera way.

Because of the strength of the writing and the voice, and the authenticity of the theme, you know you’re in the presence of something way higher quality than a soap opera, but the story telling tactics were essentially the same. Every time I was give a glimpse of a half fact, and then left wondering whilst being whisked along to another scene, I recognized a cheap trick being employed to get me hooked.

I’m not saying it doesn’t work. It totally does. I got hooked and wanted to uncover everything. But I resented Filer for playing such tricks on me all the same. And it wasn’t just plot teasers. A lot of the emotion came out of fairly underhand tactics, mainly banging on about stuff that you can’t help but be moved by. I mean, write about a dead kid and your readers will feel sad, no matter how well or how badly you do it. But this guy just kept going back to that well. However much it got me, I couldn’t shake the feeling that it was a bit too easy for him.

I should also mention A Million Little Pieces. I enjoyed that book. And I remembered it. And I recognized it here. In long passages, I felt as if Filer had just read it and trotted off to do his own version.

This all fees a bit unkind. There is some originality here. There’s undoubted talent in the language. And cheap tricks or not, I did get a lump in my throat more than once.

So where does that leave me?

Honestly, it leaves me sitting on all sorts of fences. I can’t decide whether to applaud the results, or deride the means.

Next week, a Nordic crime thriller from the publishing house that brought us The Hundred Year Old Man Who Walked Out the Window and Disappeared. This one has a shorter title though. Promise.