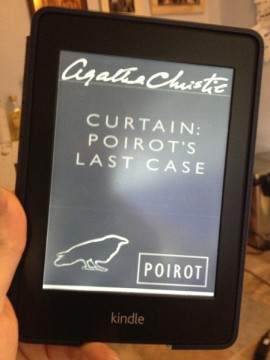 Another crappy cover from Kindle...

Curtain by Agatha Christie (Collins: 1975)Poirot’s last case, written by Agatha Christie and put in a safe with instructions to publish after her death. An elderly Poirot and Hastings are ensconced in the country house where they first met, along with Hastings’ daughter and a cast of loosely linked individuals. Poirot is convinced one of them is a serial killer who’s been getting away with murder for years. But who is it? And will Poirot bow out in victory or defeat? (Cue dramatic intro music...)

Crime fiction failed me last week. I’ve steered clear of it for a while, and my eventual decision to dive in was met with an absolute turkey. But was I dissuaded? Did I throw the toys out? Not at all. In I waded again.

In reality, this was never a risk. Nor was it a step into the unknown. Not a TV episode of Poirot or Miss Marple has passed me by, so I was familiar with the set-up (or rather, the ITV Sunday evening interpretation of the set-up). I love it. But I’d never read any of the original. So this had a feel of the inevitable.

There were some nerves, I won’t lie. I worried that my eventual meeting with Agatha Christie on the printed page, in the original form, would be a let-down; that it’d tarnish the love I’d built up for the stories through the TV series.

Thankfully, I needn’t have worried. This (you’ll be shocked to find out) did not disappoint.

It had everything I expected. So easy to read, so wonderfully phrased and neatly written that the words and the pages sped by. No rough edges, no jarring phrases (unlike last week). Christie just laid out the whole story with such effortless writing that the plot just shone through and fuelled me the whole way.

And what a plot. This has to be Christie’s most enduring skill. It’s what I fell in love with on TV, and it’s all here. It never over reaches, never seems sensationalised, never relied lazily on the explosive shock, but was always compelling. It was revealed so expertly, stitched together so tightly, with all the right details dropped at all the right times in all the right ways. Intricate, but not confusing. Warm, but not twee. Important, but not pompous. Just perfect.

And if plotting is Christie’s most vaunted expertise, her characters come a close second. I won’t go on and on and on about Poirot and Hastings themselves (though I could, as they’re double amazing creations), but the whole of the rest of the cast are wonderfully conceived and carefully related as well.

She does what I struggle so hard to do when I clumsily trip over a keyboard; she shows all the important aspects of her characters through what they say and do, rather than simply telling us. It means you end up getting to know them and creating your own opinions in an authentic way. It heightens the feel that you’re in the novel too, feeling your way through the mystery, playing detective alongside the Belgian.

The narration deserves a note as well. Curtain is narrated by Captain Hastings in much the same way Doctor Watson narrates Sherlock Holmes’ adventures, which was fitting as Holmes (I seem to remember) was Christie’s inspiration for Poirot. To ape J.B. Priestley’s style for Poirot’s last adventure, with the sidekick telling the story, worked fantastically, and gave the book a fresh feel. What’s more, it heightened the pathos surrounding the end of the great Belgian, with Hastings feeling the same sense of loss as we do at the end.

One back for the crime novel, from perhaps it’s greatest ever exponent. I don’t think this is the last Agatha Christie I’m going to read. I feel a new collection coming on.

Stopping short of 10 purely to leave myself somewhere to go for other Agatha Christie novels. A bit of tactical scoring, but it’s my review, so naa.

Next week, roaring back to the modern world with a bit of modern Britain.