The Zone of Interest - shoulder hopping 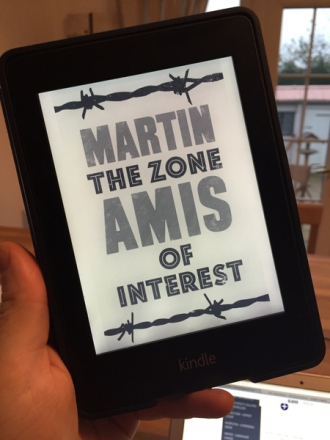 The Zone of Interest by Martin Amis (Jonathan Cape: June 2014)WWII novel with a difference, set in a labour camp and straddling the inner monologues and motivations of the naïvely evil, the brilliantly conflicted, and the destroyed.

That’s what Amis did here in what is a pretty ambitious crack of the whip. I honestly think few writers could have got this book down on paper (or e-ink, or whatever). How to portray the God awfulness of a Nazi labour camp, in the dying throes of a desperate regime? How write that in a way that shocks, but isn’t opportunistically voyeuristic? And how to do it in a way that brings something new to a tragedy that every grown human in the 21st century has already been told? Well, do it with three central characters you might not have met before (or at least not in this detail), and do it with the kind of poetic writing style that Amis knows I’m a sucker for.

The people he creates are not normal. Partly because they’re in a very not normal situation. And partly because there’s some insanity in some of them to start with. But as you burrow your way through the book, they become monsters. Even the redeemable, even they are turned grotesque by the world that’s been created.

And Amis’ beautiful writing gives the narrative the kind of emotional power that you should never get bored of. I’ve only read a couple of his before, and this one was a million miles away in terms of concept, but a lot of the themes are consistent, and that writing, that gorgeous phrasing and tempo and art, is right bang in the middle of everything else.

I heard Amis talk on the radio once. He came across as kind of a pompous jerk face. But boy can he write. And boy can he tell a story. So I don’t think we’re going to be friends. But I’ll buy more of his books, no doubt.

Held from that very top table score because all that shoulder hopping, coupled with the intense content, left me pretty exhausted. Which is no bad thing, but I kind of feel a 10 gets a bit more balance between smacking you around the head and giving you a breather.

Next week, another new hero I’ve discovered this year gets another airing on GBR. You lucky devils.