Falling Out of Time - give it some 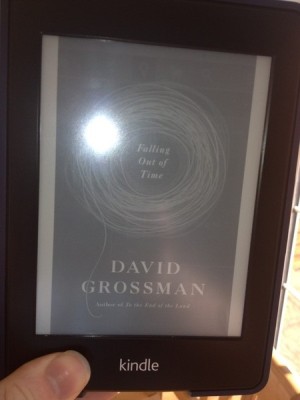 Falling out of Time by David Grossman (Jonathan Cape: 2014) A town in which everyone seems to have suffered the death of their child tries to come to terms with it by following a man walking around the village in circles.

I’ve written before (probably a little flippantly) about how lazy I think it is to make a dead child the central emotional point in a story. Not a lot of people agree. Nathan Filer went on to win the Costa Book Award on the back of it after all. But it just seems too easy to me. It doesn’t take great writing to induce a pang of pathos around such a tragedy. All you need to do is state it.

But when a story is based on the author’s own pain, it seems to be different. It’s what marked Julian Barnes’s story of loss out from Anne Tyler’s. And (for me, if not for the Costa committee) it’s what marks this book out from Filer’s.

And of course, I’m being a jerk. I read Julian Barnes and I read this book knowing ahead of time that they were both based on the real life heartbreak of the author. I read The Shock of the Fall from Filer knowing it was mainly made up (albeit underpinned by Filer’s own experiences as a mental health nurse). And that fore-knowledge is bound to cloud things.

Did Grossman’s writing really tug at the heart strings with more authenticity, or do I just think he did because I know the back story? Did my preconceived opinions obscure the fact that the storytelling skills on display by Filer were every bit as good as Grossman?

There’s no way of knowing. The fact is I knew what I knew when I opened both books. And they affected me differently.

Falling out of Time is out-and-out beautiful.

It’s confusing as all heck, written in large sections as poetry and laid out as more script than novel. It asks a lot of you, and demands concentration. But every few pages, you get that blown away feeling. A few short phrases, or a muscular monologue, that stop you in your tracks, lump in your throat and butterflies in your lungs.

This is one of those books that can be a gem if you give it the time to be. Not one to read in five minute snatches. One where you really have to hunker down and give it time to work its stuff. Read it in one sitting even – it’s a pretty short fella.

But these really-makes-you-think books are tough to pin a GBR score on. I’d give it a high digit, but I don’t want you all running out there to buy it (don’t lie, I know you do) only to come back complaining at me that it was obscure, inaccessible, downright boring.

This ain’t a book for all people and all times. But it has plenty enough gold running through it to be worth the effort.

Bank it in the Hall of Fame. It's that good, and I want it on my bookshelf. But that’s a 9 with about a 500-word health warning attached.

Next week, a bit of Waugh, because it’s been a while.