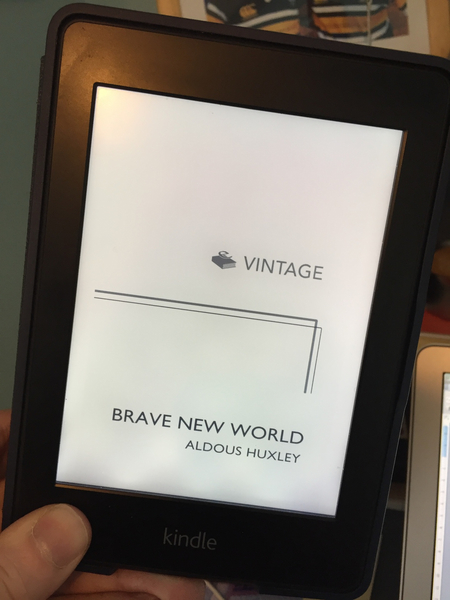 Brave New World by Aldous Huxley (Chatto & Windus: 1932) Bernard Marx isn’t comfortable in the world of tomorrow, where everyone is brainwashed, highly sexed, drugged, obsessive consumers, but above all, happy. He finds one of the few remaining savages, and reintroduces him to society, with pretty disastrous consequences for everyone.

This is squarely in that bottomless pit of books I should have read by now, but never actually have. It gets referenced all the time, and I usually smile and nod like “yeah, sure, I know exactly what you mean.” I’ve gotten away with it so far, but I figured I should finally actually give it a proper go.

I like 1984. I really liked Fahrenheit 451. This guy, from what I understood, paved the way for those, so I turned page one already kind of expecting to like it. And I did.

It does a few things well. Like introducing you to a completely out-there future from a bunch of different perspectives. It doesn’t over-explain stuff, but it also doesn’t leave you feeling too confused. You’re just plonked in the middle of it all, and shown how things work. There are one or two bits of clumsy exposition, but on the whole, you feel mostly like you’re taking a relaxed wander through rather than a claustrophobic guided tour.

The other thing it does is live in the grey areas beautifully. The sense and madness of the totalitarian regime are given equal time to breathe. They’re both presented fully. You’re left with no doubt as to which side of the coin to root for, but at the same time, you can see the logic of the bad guys. They’re not mindlessly evil. They’re not cartoons. They’re misguided. They’re tragic. They’ve created something out of good intentions that has ended up being monstrous and inhuman, but they're not monstors themselves.

That’s a pretty cool tightrope for Huxley to walk, and adds to the sense of reality. This is a mad world, with mad attitudes and mad mindsets, but because you can see the thought process – see how people got to where they are, and see where the wrong turns were taken – it has a senseof alarming possibility. I loved that.

Honestly though, for all of that, I prefer 1984. The writing is better, the story more fully developed. Brave New World is a short book, and I felt like it moved at an unnatural pace. It was a bombardment.

This was a trail-blazer, and it deserves kudos for that, but others have done it better since. It suffers from being read now, where this kind of dystopian future, warning of a book isn’t so fresh and new anymore. It feels almost old hat, which is unfair, but thems the breaks.

Above average. Glad I read it. Made me think. But didn’t blow me away.

Next week, non-fiction. May or may not be bird related.