generosity - half the package 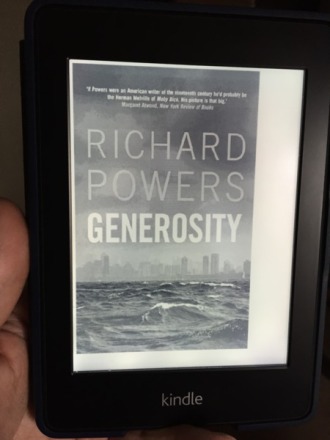 Generosity by Richard Powers (Farrar, Straus & Giroux: 2009)A loner professional proof-reader with a failed literary history decides to teach a course or two at the local university, and comes across a pupil who seems pathologically happy. Powers explores how such genetic happiness can impact individuals and the wider world.

I’ve said it before and I’ll say it again; I’m a language junkie. I love the stuff. And I love when a writer loves it too. When they put thought into the words. The language is what adds colour and beauty and craft. At least, it does for me.

And Powers thinks the same, no doubt about that. The guy can flat out write. He packs sentences with punch, and he drops them with skill and with care.

So let’s not dwell on that. I’m a language junkie, and in Richard Powers, I find myself a reliable dealer. Fact acknowledged, let’s move on.

In Generosity, Powers comes to the game with a few other tricks too. The theme is new and intriguing. And in the narrator, he digs deep and slowly into a psyche in a way that makes for a rewarding read.

But, all that said, I remained standing throughout the book. My feet remained on the ground, refusing to be blown away like I have been by Powers and by other beautiful writers in the past. The reason, I think, is that, interesting as the theme was, the stakes just seemed a little boring. Which is a crime. Once you understood the kind of ride you were in for, the journey seemed pedestrian. Beyond the language, which was enough to keep a mild grin on me throughout regardless, the rest of the package seemed blown out by about a quarter of the way through.

Have you ever read Room? No? You should. It’s a good book. But it was also the first time I really noticed a failure I spotted in Generosity too. That of a knock-out idea that, once stated and prodded a little, just wasn’t enough to hook a whole novel around. It ran out of steam. Early.

I don’t want to put you off this book, or Richard Powers generally. If you’re a language junkie too, you’ll enjoy it. And I’ll pick up another Richard Powers book the very next time I’m allowed.

But for the whole thing, I can’t lift myself above a

Next week, it’s the GBRYIR, you lucky devils.