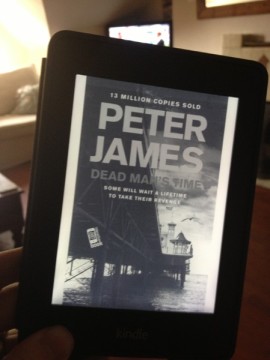 Dead Man’s Time by Peter James (2013: Macmillan). The latest in the Roy Grace series sees Brighton’s boys and girls in blue hunt down the perpetrators behind the torture and murder of a little old lady. Various antiques have gone missing, including a multi-million pound watch. The little old lady’s 90-odd year old brother is also on the hunt though. Driven by an intense sense of personal loss, both of his sister and the watch which was his last link to his father, he’s willing to plough his vast wealth into finding the criminals and wreak his own brand of revenge.

Ugh, this is a toughie. I’ve wanted to get into crime fiction for a while. Seems like it’s everywhere at the moment. Can’t wade through fiction supplements or book fairs in the last few years without tripping over crime writers, scribbling away and amassing millions of fans.

So I chose this one. And it’s tough because my impression of the whole genre seemed to be dependent on it.

That’s a hefty burden, and not one this donkey carried with much aplomb. I did not enjoy this one little bit. It’s the umpteenth Roy Grace novel from Peter James, so it’s clearly got a few fans out there, but I have no idea why.

The thing I absolutely could not get over was the writing itself, which is a pretty big thing to get hung up by. The phrasing, especially the dialogue, was just terrible. Every conversation had so much unnatural exposition, and the clumsy attempts at injecting personality between the inverted commas were plain cringe-worthy.

There was just no authenticity about it at all. It felt and read like a parody; like someone writing a hammed up (and bad) crime novel. Unless I’ve missed something and the joke simply went way above my head, that’s not what James was going for.

After the writing came the plotting. If there’s one genre you could maybe forgive bad prose, it might be crime. Forgive all that lumbering phrasing for a bit of ingenious twisting and turning in the plot. But no twisting and turning here. No real mystery. A few pretty large holes and a leap of faith or two to boot.

The only real puzzle of the book revolved around the meaning behind a list of hastily scribbled down numbers. I won’t tell you how James resolved that one, but suffice to say I had to stop when the reveal came, chuckle out loud, and stammer through it all to Mrs GBR – I just had to tell someone how ridiculous it was, there and then.

I’m not sure Mrs GBR cared that much, but it made me feel better to let out some of my exasperation.

So no, Dead Man’s Time did not represent crime fiction too well. But I’m willing to give it a mulligan. I’m willing to say maybe this simply wasn’t my type of crime novel.

I go back to how popular this series is. And I go back to the nature of books and of art. It’s subjective. It’s about as subjective as it gets. It’s a big wobbly ball of subjectivity. How else do you account for the viewing figures of Mrs Brown’s Boys?

But I have to give this a score. In my opinion, which is just one, it has to be a

I’ve read worse, but not many.

Next week, it’s crime fiction’s do over. I’ll go for a second one, but of a very different type.