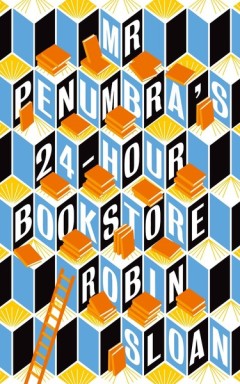 Mr Penumbra’s 24 -our Bookstore by Robin Sloan (Atlantic Book, 2013). Clay needs a job, and so lands as a clerk in a bookstore. It has mountains of old books at the back, an enigmatic owner, midnight customers, and an unfeasibly detailed ledger. Of course, there’s a major secret mystery lurking in amongst it all, which could turn out to be the biggest mystery around. Clay spends some of the book working out what it is, and the rest trying to solve it.

Balance is a wonderful thing. Whether it’s a hot curry followed by a cold beer, or a dog in a tutu walking on a tightrope, balance never fails to satisfy our in-built desire for a perfect weighting up of opposing forces.

Pertinent (I promise) in the book world because the best writers constantly tip-toe on a bunch of fine lines. Emotional, but not too sentimental. A strong voice, but not tramping all over the plot. Action packed, but with a purpose. You get my point.

Mr. Penumbra’s 24-Hour Bookstore got the point, at least most of the time. Sloan writes with all the right spices in mostly the right measures. There’s a bunch of recognizable stuff in here – sympathetic main dude, quirky supporting cast, a just-out-of-reach mystery – but it’s not recognizable to the point of yawn. The main spice he uses to stop that happening is a conversational tone which gives him free reign to drop in frequent bursts of pithy writing. He drops in an arresting phrase, or some fun structuring, or a tight observation, and thus achieves balance and keeps you on the page with him.

No doubt, Sloan has some moves.

But (sorry, there’s usually at least one), I got the sense he started to get a bit out of breath as the book entered its third act. He set the bar high at the start, kept up the pace, and then seemed to run out of steam. I felt he didn’t quite know what to do with the premise he’d created, and the bursts of voice started to get less frequent. I kept going, of course – he’d grabbed me, and no matter how trudgy the thing got, I wanted to see it through to the end.

And I was rewarded too. There’s a pretty indulgent but nonetheless wonderful postscript to the book; a what-happened-next bit. In those few pages, it felt as if Sloan was refreshed, back to his first and second act self. The writing was original again, and he balanced warmth with sentimentality like the ninja he started the book as.

So in all, a pretty enjoyable read. Two acts out of three aint bad, right?

Way above average and well worth a read. I loved this for big chunks.