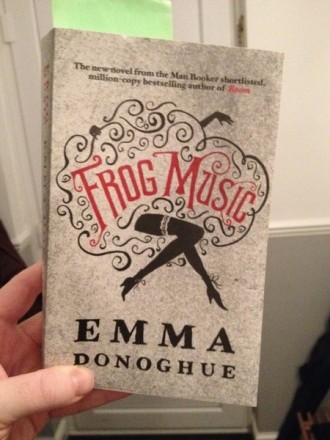 Frog Music by Emma Donoghue (Picador: 27 March 2014).Blanche is living it up in 1876 San Francisco, dancing every night for appreciative crowds, and earning enough on the side in the “after-shows” to bank roll the love of her live and man about town, Arthur. Then she makes a new friend, and things go south fast.

Emma Donoghue is a cat with more than a few tricks I can jive to. She’s amongst the most talented writers around, and a lot of the tricks in her bag are on full, wonderful display in Frog Music.

At the head of the queue is her gift for ventriloquism. You know Emma Donoghue from Room, the book where she told the story of a Josef Frtizl type situation through the eyes of a kid who’d grown up in a single room before breaking free with his mum. That book, for me anyways, had its flaws, but the authenticity of the kid was not one of them. Donoghue nailed this kid’s voice right to the post.

And she does it again here. Every scene in Frog Music is from the perspective of Blanche, a dancing, prostituting, French immigrant to 1876 San Francisco. A wildly foreign person, but Donoghue once again makes you forget Donoghue is there at all, and you’re just utterly absorbed in this character; this real person. More to the point, Donoghue makes her rather unlikely character arc believable, all by force of her ninja characterization skills. It was only after I put the book down and thought about it for a bit that I realized just how unlikely Blanche’s conversion was, but in the moment, when Donoghue has hold of you, you swallow it all whole.

Of course, Blanche is based on a real person. Frog Music is Donoghue’s take on a series of events which actually happened. So there’s a base of reality here to begin with, but Donoghue cuts through the history and the newspaper cuttings and the theories (that’s another thing, Donoghue does her research and then some), to create something intensely personal.

And so is her structuring. She moves back and forward in time. Not massive time shifts, but Donoghue handles them perfectly. She jumps around without disorienting you, and still manages to drop the big plot points at exactly the right times for the story’s overall structure to carry water. It’s a juggling act, but not a nervous one. You never feel Donoghue is about to drop the ball, not once. You always feel in expert hands.

And if she juggles plot well, she juggles theme better. I walked away not really knowing which was the more powerful theme here. There’s flawed love, motherhood, unconventional friendship, all of which played against the backdrop of a San Francisco with more social problems than you could wave a stick at. There’s a whole bunch packed in here, but again, Donoghue guides you through it with a steady hand.

So yeah, Donoghue is a pro. No doubt about it. If there’s a flaw, it’s the crime. This is the first time Donoghue has tackled a novel with a crime at its centre. For me though, it was slightly awkward. Not bad, just not as aces as the rest. The red herrings, the stumbling through the investigation, the wonderings and the suspense – it was all there, but felt crow barred. Like there was a crime novel wedged between the lines struggling to get out, unable to flourish in amongst all this other great literary stuff.

Where does that leave us?

Honestly, it was so very nearly a 9 GBR. I already feel bad for stopping it short at 8. But I’m sticking to my guns. The crime stuff is awkward enough. Also, it’s probably about 50-100 pages too long. Enough to take the edges of and leave it at 8, which is still pretty awesome.

Next week, a change of pace and scene with a novel focusing exclusively on an elderly Australian lady. Hold on to your hats!