And Then There Were None - biscuits everywhere 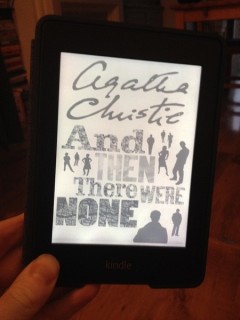 And Then There Were None by Agatha Christie (Collins Crime Club: 1939) Classic Christie, with a bunch of strangers assembled under flimsy pretences to a remote house on an island. A storm cuts them off from the mainland, which is unfortunate, as there’s a murderer in their midst.

A few weeks ago, Mrs GBR and I went on a weekend break to Burgh Island. It’s where Christie wrote this book. So, predictably, I decided to load up this book to the Kindle and read it whilst I was there.

I’m an Agatha Christie fan (thanks mainly to ITV and David Suchet), and perhaps bloggers shouldn’t review books they’re pre-programmed to like. Then again, as I’ve said before, this is my blog and I make up the rules, so tough bananas.

This was (of course) a hugely fun read. Delicately plotted, larger than life characters, mystery at every corner without becoming a parody – all that good jazz in ladles.

But (and I’m cracking a bull-whip on my back for even contemplating pointing out flaws in Agatha Christie), this lacked some of the elements that made Curtain such a hall-of-fame read.

It lacked a central character – an anchor to experience the story with. There’s no roving detective, no narrating sidekick. Instead, you’re point of view is shifted all over the shop, amongst the wide (though ever dwindling by dint of the murders) cast of characters. It keeps you on your toes and quickens the pace, but it sacrifices sentiment and familiarity. For me, I preferred the balance of Curtain.

And then there’s the pathos. Oh, the pathos. Curtain was jam packed with it. Oozing with pathos, it was. But there was little sense of sadness in this book at all. It was all about the puzzle, and the breathless race to find the answer before it was too late. There didn’t seem much pause to inject meaning.

I’ve done a bad thing. I’ve used three paragraphs of this review to tell you what I found bad in this book. I assumed you’d already know I could list a hundred good things too. I could. I could bore you for about a million words about why all Agatha Christie is double good. About how she is the plot queen. About how no-one else is able to write a murder mystery with such authenticity. About how her characters are instantly recognisable but new and exciting too (an impressive trick). About how her solutions are complex but still graspable.

Basically, about how I’m a little bit in love with Agatha Christie. (Well, a lot, but don’t tell Mrs GBR. She doesn’t read this anyway).

This one is just slightly less double-good than Curtain. Sort of how custard creams are amazing and I could eat a bunch of them, but if given the choice, I’d rather have a jammy dodger.

Why do so many of my book reviews descend into biscuit analogies? It’s like being presented with a shelf full of different biscuits, but still buying the chocolate digestives because you always do and you’re too lazy to think of another biscuit to have.

Go read this. Go read any Agatha Christie. Now. Go on. Now. I’d love to read more Agatha Christie, but I suspect you’d get bored of reading my opinions about her every Sunday.

Next week, a bit of YA superhero fiction from a bang-modern podcaster. So a gear change from Agatha Christie then.