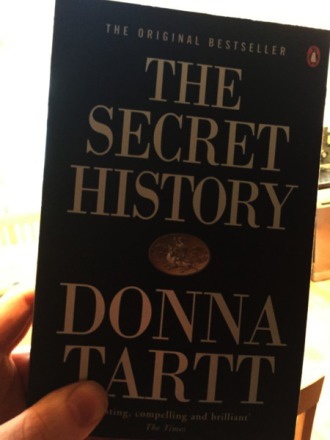 The Secret History by Donna Tartt (Alfred A Knopff: 1992) Richard Papen pulls himself out of a dysfunctional west coast family into a small privileged Vermont college. Before long, he’s inserted into the middle of a small group of Classics scholars, whose out-of-class experiments have profound consequences.

I wanted an epic to read over Christmas. You know the type. The type you can really get your teeth into. A deep world that would grab me right through the holidays. I remembered feeling that way about The Goldfinch, so I thought I’d give Tartt’s other novel a try.

In a bunch of ways, The Secret History ticked the boxes. It was distinct, had an interesting cast of characters, and was driven by a sympathetic protagonist. You felt all the way through that you were in the middle of a well put together novel.

But it never came close to pinning me back in my seat. There were one or two big dramatic punches, but there wasn’t enough pace or incident weaved through the thing as a whole. I’m not saying it needs to be a thriller. I’m not saying I need explosions and car chases in every scene. The Goldfinch managed to keep me gripped without devolving into a Sly Stallone film. But this felt like so much aimless wandering for long passages.

The protagonist didn’t help a bunch. Sure, he was sympathetic. Sure, he had an interesting back-story, and acted well as a proxy for the reader in the story. But his voice was pretty pedestrian. Forced to sit in a room with this guy, and I felt we’d run out of stuff to talk about in five minutes flat.

It nearly got away with it because of the strength of the characters, the strength of the writing (which wasn’t exactly muscular, but was neat and well pitched), and Tartt’s ability to create dynamics which simmered somewhere near the surface. But it was rare that I drooled at the prospect of picking this up.

I’ve since picked up another book, and within a chapter, I’ve been presented with everything The Secret History was missing. Not a lot has actually happened, but I’ve been reading it with eyes wide open. It has a loud voice driving it, with an interesting perspective, and you just know that some big drama is going to happen, just as soon as the writer feels ready to drop the plot elements into the mix.

In comparison, this guy ends up with a…

I know. Everyone else lost their minds over this when it came out. And I didn't hate it. But it coasted in the middle lane too often for me to get really excited about it.

Next time, that new one I started. I’ve got high hopes.