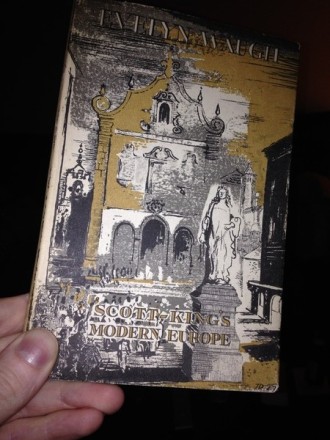 My beautiful beautiful copy. Try not to be jealous.

Scott-King's Modern Europe by Evelyn Waugh (1947: Chapman & Hall)A mild mannered classics teacher obsessed with an obscure writer from fictional Neutralia is invited to the nationwide celebrations. Off he pops, only to encounter the kind of absurd politics and stereotypes that Waugh paints so beuatifully and sends up so masterfully.

The trouble with blogging the books you read? You’ve got to ration the good stuff. I can’t go on a one-author bender like I used to. You guys would get sick of that (and don’t say you wouldn’t).

But it’s been over a year, and I’ve been very well behaved, so I think I deserve some more Waugh action.

You guys know how I feel about old Evelyn. You know because I’ve told you about it here. And here. And also here. He even won the GBR book of the year once. But all of that was a while ago, so I'm going to give you a bit of a refresher, in case you weren't paying attention first time around.

Waugh is no Madonna. Not too forthcoming with the reinvention of self. He has some knock out skills and he sticks by them. And that’s no bad thing. If you do something this good, then keep doing it, that’s what I say. Just so long as you don’t stop making the effort. Just so long as you don’t start mailing it in, throwing in pale shadows of your former skills and assuming that’ll hit the mark.

Waugh doesn’t do that. I’ve read enough of him now to realise he keeps the standards high, even if the ingredients stay familiar.

And what are those familiar ingredients, I hear you ask. Well, they're all on show here. This was absurd, but with a core of gooey melancholy. It was quietly satirical. It had strangely engaging protagonist, and laugh out loud cameos. It had all that stuff, and it was ace.

For me, A Handful of Dust is still the Waugh high-water mark, mainly because the punch of the underlying sadness in that fella was plain and simple breath-taking. But no doubt, this is another winner from a guy I could read week on week on week, if you’d only let me.

High times at the moment with a couple decent scores in a row. Next week I go absolutley silly with a book I found on my Amazon wishlist but can't remember for the life of me who reccomended it. I think it was Tom Gentry, so it's probably all his fault. (What, we're not supposed to name names on here? Sorry. Forget I said that then.)