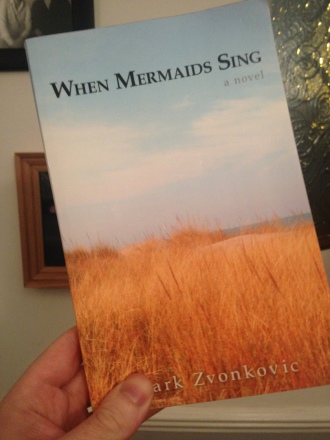 When Mermaids Sing by Mark Zvonkovic (iUniverse: 2009)Story of a day-dreaming, intellectual school teacher. Through the background noise of an unfulfilling relationship, professional apathy, and dinner party debates, he becomes exposed to the world of 1970s cults, and ends up on a mission which takes him to the core of one.

You know what’s tough in writing? Well, yes, I see what you mean, a lot of it is tough. Not least of which is the actual coming up of an original idea. And then there’s the sitting down and concentrating on stuff for long periods of time. And then there’s the getting over the paranoia that it’s really all pants and why are you bothering anyway.

But one of the tough things, one of the things that trips a bunch of people up, is dialogue.

You need it. People (I mean you) skip to dialogue passages, cos they’re where stuff often happens. They’re where you get most direct exposure to the characters and the scenes. They’re where you’re furthest away from the writer’s voice and closest to the book’s voice. Dialogue is double important, but it’s an elusive bugger; difficult to achieve with consistent, smooth believability.

This guy though, this guy knows where the dialogue gold is buried. This book has large, long passages of conversations, and for the most part, they flow along without a knee or an elbow sticking out. For a first time published writer, that is impressive.

In fact, it was the most impressive aspect of the book by far. There were other entries in the pro column though, no doubt. Just that they often come with equivalent notches in the con column.

Pro - the themes were interesting, and well explored. Con – that exploration was often set in pretty contrived situations. Pro - the protagonist was properly drawn; gentle, day-dreaming, deep. Con – the supporting cast was pretty one dimensional. Pro – there were useful detours to the plot which completed the world of the book nicely. Con – it felt like the meat of the plot only really got going about three quarters in.

So plenty to get your teeth into, with the odd sour taste along the way. Add in that beautifully natural dialogue, and you end up with a pretty solid...

Next week, a properly bizarre book from a former Booker Prize shortlister.