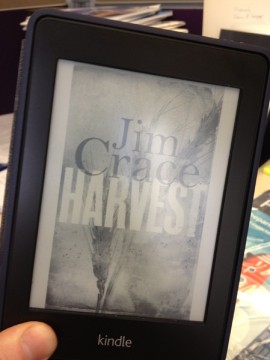 Harvest by Jim Crace (Picador: 2013) First person novel about a remote country village which gets turned upside down by the arrival of outsiders, a distant cousin with designs to bring sheep, and a whole lot of mobs with pitchforks.

First of all, Kindle book covers suck eggs. No colour on this. The print version is bright yellow. Really jumps at you. Damn technology. I love my Kindle, but in the words of Gob, "Come On!"

Covers aside, on to the review.

When I very very first started thinking seriously about writing, I was daunted by the expectations of plot. It seemed to me unless the world was in danger of ending or the human race was on the verge of extinction, it was difficult to create the kind of tension a plot needs. Maybe I had just been watching too many Hollywood blockbusters or reading too much Dan Brown. Either way, I struggled to become committed to a sense of the dramatic without the stakes being super mega high.

It’s books like this that talked me down from the Armageddon edge.

I’m not saying this is one of those atmosphere books where not a lot actually happens. It’s not. A bunch of stuff goes on. There’s fire and deaths and mobs. There’s lust and upheaval and even a bit of drug action. But that’s not where this book gets its power from.

Its power (if that’s not too much of a wankery phrase to use, which it definitely is) comes from the poetry of the narrative (which is also a wankery, yet accurate, phrase. Sorry). It’s warm and engrossing to read. And it’s not show-offy. Crace hasn’t got muscular, powerful prose, but you still hear the narrator in your head with a deep, booming voice. You identify with him and you’re entirely on board with his whole deal.

You don’t notice it in the same way as some more high energy books, but Harvest just drags you in, and you end up looking at it on your table with little grin on your face. There there, nice book.

Which is probably where it falls down. It’s nice. Lovely. I liked it. But love it? Probably not. Nice books can be brilliant. Wodehouse is nice, and we all know how I feel about him. Nice books have won Booker prizes. But this isn’t really in the same nice league.

Good book. Go read it. But we probably shouldn’t spend too much time talking about it afterwards.

Next week, an actual crime novel, which I don’t think I’ve done before. Try not to get too excited.