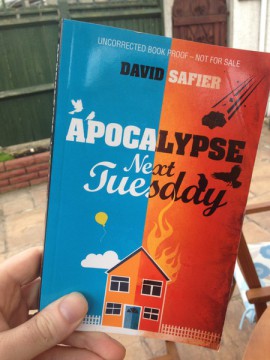 Apocalypse Next Tuesday by David Safier (Hesperus Press: May 2014) Marie lives in Malente, small town Germany. She’s a bit of a disaster area. When Jesus and Satan visit town on their way to kicking off Armageddon, Marie’s personal issues get tangled in with the final showdown between good and evil.

It’s not cool to be mean. But this book sucked peanuts, so I’m going to struggle to tell you about it without appearing like a jerk.

I don’t like doing this. Anyone that writes a novel is a good egg by me. And this guy’s written quite a few. And got prizes and everything. But damn if this wasn’t bad. My eyes were dizzy through rolling.

I should tell you why. Lets’ try this in the shit sandwich style shall we? You know that trick, right? A piece of bad news couched by two pieces of good news, to make the bad news land more softly. Here goes…

BAD NEWS: The dialogue is atrocious, with adverbs being flung around like they’re so much free candy. People spoke “carefully,” “compassionately,” “meekly,” “lovingly.” Every damn sentence ended in something from an emotional thesaurus, and it was super distracting.

GOOD NEWS: You’ll only need to read it once.

There. Shit sandwich number one, complete. How about this one…

GOOD NEWS: The use of a translator means it’s almost entirely in English.

BAD NEWS: It constantly switches between first and third person, which is not a clever structuring technique, it’s just lazy writing. Pick a perspective and stick to it.

Shit sandwich number two, lovely. I’m getting the hang of this. Here’s a third.

GOOD NEWS: I didn’t pay any money for this book.

BAD NEWS: The humour is ridiculous, like a BBC sitcom. And I’m not talking about the good ones. I’m talking about My Family and that super hero one Ardal O’Hanlon did. It’s terrible. It’s so bloody TWEE! And not nice twee, like Miranda. Bad twee. Like... well, you know what I mean, bad twee.

GOOD NEWS: Once finished, the book can be hollowed out and used to hide booze.

BAD NEWS: There’s zero art to this. None. Not an ounce. Plot elements seem made up on the fly, relationships and character developments are hurried, there’s tons of truly clumsy exposition, and the ending is possibly the weakest I’ve ever read. Like, really weak. But most annoying of all was the utter failure to live up to the subject matter. Huge themes, big ingredients, the stuff that better authors have worked intelligent, provocative, challenging prose out of – but it all ends up in barely grasped, half thought through frivolity here.

GOOD NEWS: This book was not written by Wilbur Smith.

I kind of gorged on that last one, but you get the picture. I didn’t enjoy this, and this was the nicest way I could think of to explain why. I’m diplomatic like that.

Why not "0 GBR"? Well, i) this was originally in German, so there could be a lot lost in translation, ii) this is from Hesperus press, who have published some stonkers in the past, so maybe I’m missing something here, and iii) I’m a nice guy.