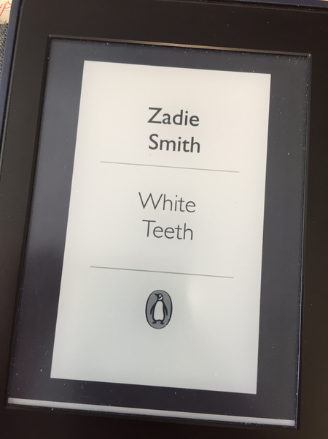 White Teeth by Zadie Smith (2000, Hamish Hamilton). An epic of a story set in north-west London, following two (arguably three) families as they come to terms with their past, their present, their faith, their identity, and everything else that makes up a life.

This book crept up on me. Which is an odd thing to say about a book, especially the way I read them. I take a long time to read a book , and I take breaths between sections. And so, for it to creep up on me, it must have done it pretty darn sneakily. Must have been very slow in the creeping.

I distinctly remember reading a bit, about half way through, thinking, well, this is all very nice and lovely and entertaining, but not exactly the stuff of legend; not the loud boom of a book that launched one of our generation’s biggest talents. I was reading one of the many pictures Smith painted of one of the cast of highly interesting characters. I was reading back-story, diversion, a bit of plot that went to build a character rather than a storyline. And I was entertained. It was lively and witty and colourful. But it was no explosion.

And then I remember approaching the last fifty pages, and being propelled. Honest to goodness propelled forward, hungry to eat up what Smith was laying down.

Somewhere along the way, all of that lovely wit started to hold something else in it as well. The wit stayed, never left, but in amongst it, meaning had crept in. Questions and depth. It’s not a sermon of a book, doesn’t proclaim a grand lesson. It just looks. It looks intensely at a group of real people and it takes you deep into their cores. Into their life meanings. Into the contradictions and confusions and mess of them.

And by the time I put it down, I was aware of it. I was breathless with the awareness. I wanted to go back to the start, back to when it was all just a lovely read of a book, and see those people and their actions again in the light of everything else that Smith had shown by the end.

This is an intricate book. It weaves a bunch of paths, and brings contrasts and parallels to the surface in each in a way that just makes you want to pant.

All of this is for naught, of course. Forests have been felled to contain the printed praise White Teeth has invited. There’s not much I can say that hasn’t been said about it. The lexicon is too big for me to add any weight to.

I liked this book. I liked it a lot.

I’m told Smith wrote this when she was 23. And she’s said since there are parts she’s embarrassed of. And there are bits that reveal a young writer. A voice every now and then which, though cheeky and amusing, is probably too loud over the top of the story. But give me a break. Twenty three! That’s not fair. It’s a criminal amount of talent.

Quit showing off, Smith, you’re making the rest of the class jealous.