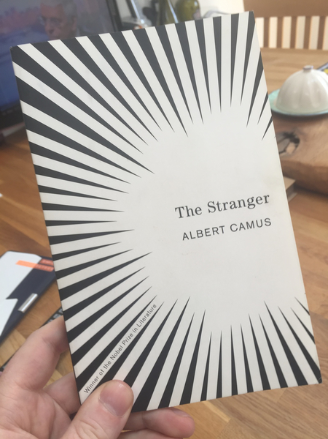 The Stranger by Albert Camus (1942: Gallimard). Meursault is a man in Algeria whose mum has just died. He has a standard life from the outside looking in, but the inside looking out reveals a pretty strange man. And then (mild spoiler) he kills a man. Not that that seems to affect him much.

Stewart Lee does a whole bit about people not being qualified to review him. It’s funny because it’s absurd and true at the same time. It’s absurd because he’s a comedian – as long as people are can judge whether they’re entertained or not, they’re entitled to an opinion. But it’s true too – his humour often lies in picking apart established concepts and ideas, so you won’t be able to arrive at an informed opinion if those concepts and ideas are unfamiliar to you.

I feel unqualified to review The Stranger.

I know Camus was a contemporary of Sartre and others. I know his writing wasn’t just writing, it was philosophizing too. I know he’s making points about existentialism and morality and perception. But I read this as I read anything – without a discussion group, without guidance; just as a reader hoping to be entertained and provoked.

And because of that unprepared approach, this knocked me back a bit. It’s so distinct in tone and feeling and perspective. It is not normal. The protagonist seems dislocated from reality. Detached, but in a way he’s entirely comfortable with. He’s absent most of the recognizable human emotions and reactions, but seemingly ignorant of how out-of-step with the rest of the world he is.

And that, all at once, is captivating. It set my mind racing. I wanted to know why Camus was painting him like this. About what points he was trying to make.

Camus keeps hitting you over the head with the basic nature of this man, in the way he reacts to events, and in the thoughts that pop into his head. Slowly, I started getting some of the point. I started understanding some of what he was saying, and it made me uneasy. Uncomfortable. And that was a thrilling feeling.

But, as always when approaching a highbrow book without any prior direction, I’m 100% certain there was greater depth and greater nuance here that flew a mile over my head. There are no neon signposted answers on the page. And that’s frustrating. I felt unequipped to unlock most of the good stuff. I feel smart, but I’m no literary scholar, and there are ideas here I don’t know the foundations of.

Which leaves me with a couple difficult questions. Is it my fault, or is it the fault of Camus, that a lot of the pay-off of this book was left unspent? And was the ice-berg-tip of worth that I did get enough to make this worthwhile?

Pretty easy to answer actually. For the first question, it’s both of our faults (obviously). For the second question, yes. Yes. Though I’m sure there remained gold un-mined as I read this, what I did decipher was entirely worth it. The ideas were fascinating. What it says about the human state was eye-opening. And even if you leave the philosophy and social commentary aside, the story and the characters were captivating in their own right.

So I’ve talked myself into an

Next week, something altogether more simple. Well, actually, not really…