BACK FROM THE BRINK - PEOPLE SAYING STUFF 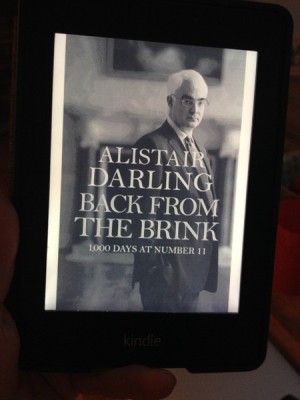 Back from the Brink by Alistair Darling (Atlantic Books: 2012) Darling’s account of his nearly 1,000 days as Chancellor, which happened to coincide with perhaps the biggest financial crisis of modern history. Not his fault, honestly.

I get a dilemma every time I review non-fiction. Like I need to make excuses from the get go. Sure, it’s direr and there are no flurries of dialogue. Twists are gentle and turns predictable. But that’s fine, cos this is no novel.

Now and then you get the non-fiction book praised for “reading like a novel.” This book is not one of those occasions. It’s one long monologue from Darling (bite your tongue on the obvious Black Adder jokes), in which he tells you fairly sequentially about where it all went wrong, what he did to try and fix it, and the state of the house when he gave the keys back.

But what it lacks in colour and prose, it makes up for in other areas. For starts, Darling outlines the big global story of our time pretty well. You feel him reigning in any opportunity for complexity, and opting instead for relatively straightforward explanation and analogies.

And then there’s the reality of it all. This huge event that affected the whole world and will probably be looked back on as the defining happening of our generation is brought out of the abstract by Darling. At its core, it’s a bunch of people in rooms talking about stuff. I find that kind of fascinating. And it’s further proof that the whole world is just people walking around, talking, pretending there are bigger forces in play. There are no bigger forces. It’s just people saying stuff to each other. Sometimes, it's pretty dumb people, too.

Then there’s tone. Whilst Darling makes the odd token effort towards humility, it seems forced and rooted in the “I-might-not-be-right-but-I-definitely-am” school of self-awareness. Praise for others is fleeting, and big breaths are dominated by a systematic dismantling of Gordon Brown.

But, without that stuff, it gets even drier, right? Without a bit of good old fashioned self-aggrandizing and scurrilous attacks on political foes, it’d end up just being a timeline of events, right? So as self-serving as all that stuff was, I’m glad it was still in the book.

Where does that leave us. Well, it leaves us with a...

Interesting because of the subject matter, and a nice peek behind closed doors, but there are going to be a lorry load more interesting accounts of the crisis. I’m waiting for the Hollywood blockbuster version, probably with Clooney playing Darling.

Next week, back to novels, with one about Jesus roaming around in suburban Germany.