The Goldfinch - a biggie 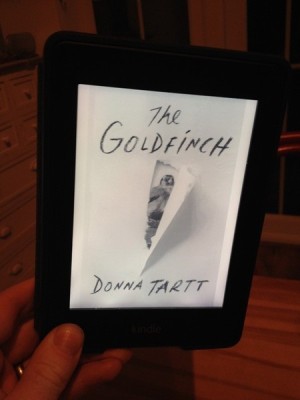 The Goldfinch by Donna Tartt (Little, Brown: 2013). A bit of an epic for the once-in-a-decade novelist. Goldfinch charts the eventful course of Theo’s life, a guy who faces his fair share of personal tragedy and upheaval. Theo anchors most of what’s good (and plenty of what’s bad) in his life on a masterpiece painting of a goldfinch.

People were going nutso online about the launch of this book. Here at GBR, we tried to get an advance copy, but even an outlet of our standing was denied, such was the hype. I know, tough to believe, right?

But it was understandable. Tartt only writes like one novel a decade, and they tend to be out of the park hits. Goldfinch promised more of the same.

At around 800 pages, it’s an intimidating read – one of those that spans the entire course of the protagonist's life. An eventful life too, so there was plenty of grist for the plot mill. But it’s not thrilling storylines that Tartt is revered for, it’s her writing and the emotion she soaks her books in.

Reading this, it was obvious why people love Tartt. She showed off a bunch of different tricks. The outset of the book is characterised by an intensely delicate style. It’s shimmering writing; not airy fairy, but careful and rippling and fine. A bit like a goldfinch. It had a voice so dreamlike without being all pink fluffy princesses, that I found myself highlighting passages, which isn’t something I’ve done in a while.

But she had other skills on show as well. Tartt shifted gears a few times, with the prose moving from delicate, to booming, to despairing, to action packed, to philosophizing. She built up some pretty devastating crescendos of emotion, made all the more stark by the hazy style which preceeded it.

I have two nits to pick though. First the bulk of the book is a flashback from the first few pages. I hate flashbacks. Hate them. The more so when around 700 pages of the book serve as flash back to the first 20. It felt a cheap structural trick, and not one that was needed.

Second is something I’ve banged on about before. I just don’t know how to feel about books of this length. Sure, I ended up pretty addicted to it. It was so comfortable to read, more like I was just absorbing it rather than registering each word. But I have no idea if that's because Tartt is aces, or because I was reading it for so damn long that it got to be second nature. It’s the length trick – drone on for long enough, and eventually people will get used to hearing your voice, and not notice so much when you say dumb stuff.

I’m sure I’m being harsh. I’m sure the velvet-ness of Goldfinch was all down to Tartt’s talent. But when something’s this long, I just can’t be sure.

Altogether, that adds up to an

Really impressive book, but enough doubts about it to stop it short of the hall of fame.

Next week, I have no idea. I’ve been spending so long reading this one that the pipeline is a little light. I’m sure I’ll find something though.