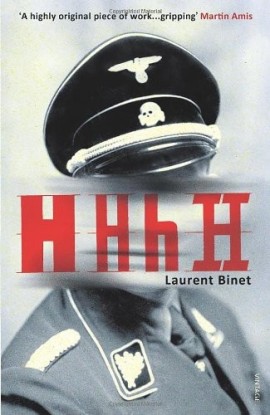 HHhH by Laurent Binet (Vintage: 2013). The story of Operation Anthropoid during WWII, which involved two Czechoslovakian parachutists being smuggled into Prague to kill the ‘most dangerous man in the Third Reich,’ Reinhard Heydrich. Apprently, everyone in the SS said 'Himmler's brain is called Heydrich', which in German spells HHhH. So that’s where the title’s from, then.

Original doesn’t cut it. This guy took on a mountain sized task with this book, and you get the impression it almost drove him loopy.

He’s plain and simple obsessed with the story of the assassination attempt on Reinhard Heydrich in Prague in 1942. Sparked by the bare details of a story his dad told him when he was a kid, this guy has devoted decades of his life to building out every aspect of the event. The result is a man with an almost unhealthy relationship with a sub-plot of WWII.

That’s what makes this thing different. It’s not history with an unseen storyteller. Binet is front and centre here, smack bang under the same spotlight he’s shining on the freedom fighters and the Nazis.

He writes down the dilemmas he’s facing, the blind alleys he goes down, his reactions to other films and books, the emotional attachment he feels with people and places in the story, everything.

For us lot, the readers, it means you end up with a twofer. You get a gripping history book, that’s a given. All the shock of the Nazi regime, all the glory of the resistance, all the usual WWII stuff.

But you also get the personal memoir of a dedicated researcher as well. You go up and down with Binet as he struggles with his material. Instead of having chats with friends and colleagues about how to tell this story, Binet chats with us instead. You get the conflict he faces as he tries to stay true to the known facts, and you get to enjoy the occasions when he lets himself off the leash to invent dialogue and more intimate scenes he’s inferred from his prestigious knowledge of the events.

There are flurries of style all over the place, and Binet uses a few tools (one sentence chapters, first person dialogue, reproduced diary entries, etc) to keep the book flowing like a novel. He even calls the book a novel himself. Not “like” a novel. Not “a history book that reads as well as a novel.” A novel in its own right.

Who knew there was a new way to write about WWII. I’d have thought it impossible, but here it is.

Years of work. An amazing read. And we’re back on track with a…

It’s a first maximum for the non-fiction crowd. Also a first for the “translated book” crowd, though those guys are less fun. *kidding, translated book crowd, I love you guys too*

Next week, I’m having a pop at something Amazon tells me is poetic. Hmm…