Human Traces - around in circles 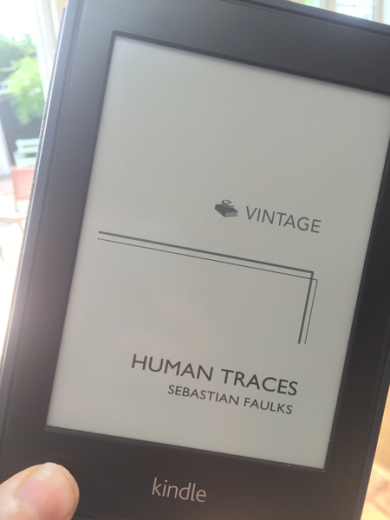 Quit it with the terrible front covers, Kindle!!!

Human Traces by Sebastian Faulks (Vintage Books: 2006). Epic novel taking in the lives of three central protagonists spanning the turn of the century. Driven at its core by an exploration of mental health and the mission to find cures, the novel takes in themes of love and fidelity, friendship and family, professional and emotional worth, and a few other things besides. Stages range from the idyllic English countryside, to mental asylum slums, to turn of the century Paris, to the Austrian foothills, to the heart of Africa, to the grime of WWI. Yup, it’s an epic.

Got to be the longest blurb I’ve written for a book in quite some time, but this fella takes in a bunch of stuff. It’s ambitious, and it touches on so many areas of life as to make you dizzy. It has the room to; it’s a bear of a book. If I was one of those guys who doesn’t feel bad about just giving up on a book half way through and starting something else, I might have.

But I would have missed out. This book has the scope and the space to have taken me through about half a dozen different reactions, which means it feels glib to try and sum it all up in a few hundred words.

Sure, there were parts where it bumbled along and I got bored with being fed detail I felt was superfluous and painful. But then there were long sections that seemed driven with energy too; parts where I was fully dialed in and racing to find out what happened next.

Same goes for the writing. Long periods of fairly matter-of-fact trudgery. Then you’d get hit with a scene of beauty that locked you back in again.

Even the core subject matter had its peaks and troughs. There were times when I lost all interest in psychiatry and mental health, and the particular theories and experiments and treatments. And there were times when it seemed vital; when the life work of a couple of the main characters seemed every bit as important and fascinating to me as it was to them.

Ugh. I’m going around in circles. Great in parts, awful in others. It definitely committed that cardinal sin of boring me fairly regularly, but then it also hit on the saintly virtue of occasional soulful writing. Condemn it for its sins? Elevate it for its virtues?

I’m coming over all Jekyll and Hyde. A bit Harvey Dent.

Has to be a sit on the fence score, right? Father GBR recommended this to me, and at one stage, I thought it was going to be a wash out. Pulled it back though. Lucky ole Father GBR.

Next time, I give Ali Smith another try. Seemed only fair.