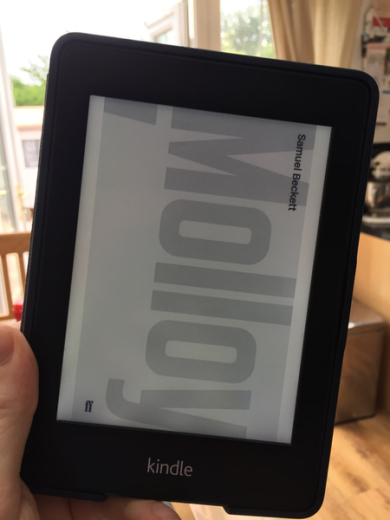 Molloy by Samuel Beckett (English version published by Grove Press: 1955) A book in two parts, each narrated by different odd-balls (or the same one? I don’t even know). First half covers travails of some vagrant as he goes through life trying to get back to his mother’s house. The second half is some kind of weirdo bounty hunter (or investigator?) as he sets out to find the first guy.

In the almighty words of that other Sam Beckett, “oh boy.” (Quantum Leap reference there for you. Hope you enjoyed it.)

Oh boy. I have no idea where to begin. None.

This book starts out confusing and gets confusinger.

The first 93 pages have two paragraphs (a short one and a much, much longer one). It just runs and runs and runs with the bizarre ramblings of an utterly bizarre man. It’s not stream of consciousness stuff; not quite as confusing as some of Will Self’s shots. In and of themselves, the events and the observations make sense. But stitch them all together and you’re constantly kept upside down and spinning. No anchors.

The second half doesn’t make much more sense. Sure, it has more actual paragraphs, and probably has an easier to follow sequence of events, but they’re still the ramblings of a mad-man; one who declines as you go on.

I highlighted a bunch of passages and sentences in this. I did that because a lot of it popped out as wise, or profound, or hilarious. There is nugget after nugget of brilliance. Phrases and wording and observations that arrest you.

I never quite settled into it, never found real comfort, but the more I swallowed, the more sense I found in-between the lines. This is a book that, I’m certain, I could read ten times and learn more each go around. I think I picked up about 10% of what Beckett was selling in this book, and I’m hungry for the other 90.

But this is tough work. This is something to be read without distraction, but with regular breaks to make a cup of tea, otherwise you’ll go mental nuts. It’s one to commit to.

I never know how to score books like this. I worry that if I give it a high score and you go read it (because I’m that influential), you’ll hate it. For large chunks of it, I was not enjoying myself. It’s a very easy book to hate. To miss.

But at the same time, I can’t stop thinking about it now that I’ve finished it. And part of me, a big part, wants to pick it up again and start over.

What does Ziggy say, Al?

That’s where I sit with it. 6. If I read it again, and (hopefully) take a bite out of that 90% I missed, I’ll up the score. And again if I read it a third time. By the time I’ve got through it a dozen times, I suspect it’ll be a 10GBR. It has that in it, I’m sure, just not first time through.

Next time, a classic I’ve been meaning to take a run at ever since I read 1984.