The Big Sleep - accept no imitations 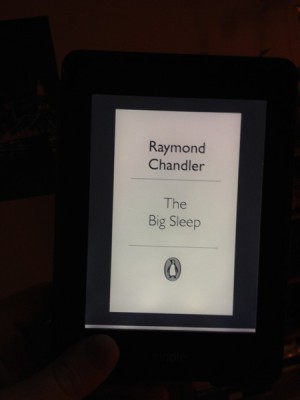 The Big Sleep by Raymond Chandler (Alfred A. Knopf: 1939)The first outing for Philip Marlowe, as he glides through messy scene after messy scene with his own brand of sardonic cool. Roll up roll up; crazy dames, honest grifters, shady dealings, mysterious motives, a bunch of money in the background – it’s all here.

I’ve been tardy. Life has taken over a little. I’ve still been reading (and breathing, obviously) but I haven’t posted in a few weeks.

Well, here I am. I’m back. And I have some Raymond Chandler to tell you about.

We all know this stuff, even if you haven’t read it. It’s been parodied to heckery and back. Philip Marlowe is the blueprint for an entire genre in a way few other characters are. The danger with finally buying a ticket to the original party, of course, is that it ends up falling short of expectations. Or (worse) that all the parodies and stereotypes it’s spawned makes it feel flat.

Happily enough, that didn’t occur. I enjoyed reading this. The one liners and similes Chandler use are streets smarter than any of the wannabe copycats. And it’s not just wit. It’s colour too. The dialogue and the descriptions don't just sound cool, they add so much damn life and vividness to the story that you can’t help but smile sometimes.

There's a real feel of another world too. Kind of reminded me of Agatha Christie or PG Wodehouse, inasmuch as their stylised versions of England never really existed the way they make out, but the idea of them always did. Chandler's Los Angeles didn't really exist, but we like to think it did. And he sure gives us all the rope to believe in it.

Sure, a few stereotypes crop up, especially in the characterization. But for the most part, they have a bit of complexity to them as well. And they’re all used just the right amount.

I can see why this stuff is classic. I can see why, in this case at least, the original stuff kicks the pants off the imitations. But I’m not going to go too far. I had a bunch of fun reading this, and you bet I’m going to read more, but it never hit me in the gut in a way that would put it smack bang in the list of all-time favourites.

It made me happy, but it didn’t make me breathless.

Kind of looking forward to reading another one of these. But will probably give it a few weeks at least.

Next week, a horror story from a guy who has a history of knocking me for six. High hopes.