Gods of the morning - made for me 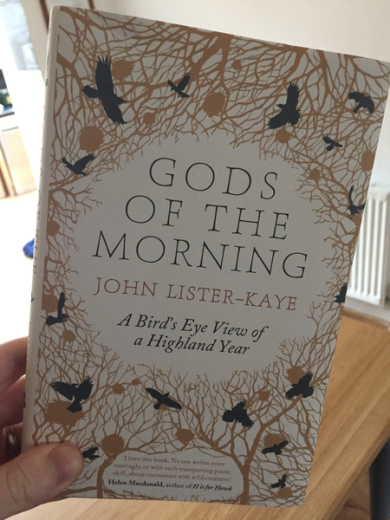 Gods of the Morning: A Bird’s Eye View of a Highland Year by John Lister-Kaye (Cannongate: 2015). A nature lover in the highlands tells of a single year amongst the birds and other assorted animals that make him such a smugly happy bunny.

I like birds. Most people who know me know that. Those who don’t, surprise.

I like them a bunch. They speak to a few things just make me happy – sitting still and being quiet, sorting things into lists, being outdoors, all that good jazz. I’ve liked them since I was a boy. Sure, in my 20s, I didn’t go bird-watching that much, but I’ve got back into it again in the last few years.

So this book, all about a guy who lives in the highlands talking about the wildlife (mainly birds, mainly) he observes over the course of a year, always stood a good chance of hitting home for me.

There are a few events in it. He talks of one or two dramas up there. There are a few encounters that add a bit of plot to it. He detours on background detail that adds a bit more context to the stuff he sees, and he even has a bit of a recurring climate change rant. But mostly, the book is about the beauty and the elegance and the intrigue he finds in the birds around him (as well as the odd deer and pine marten).

He writes with blinding colour. In a few words, he describes something so acutely and with such imagery that you can feel the scene in front of you. His language skills and the imagination he uses to convey the things he loves is mind blowing. It properly is.

But here’s the rub. I think this book was basically just written for me. It’s about birds, and its major literary feature is beautiful language. Those two things come right near the top of my favourite things list.

When I was reading this, Mrs GBR was reading a rollicking page-turner of a thriller. Every now and then, when we glanced at each other, she’d mention the latest plot twist in her book. I’d retort that I’d just read 30 pages of a next being built. For me, that was fun most of the time. But I’d bet all the money in my pocket against all the money in yours that Mrs GBR wouldn’t have swapped her book for mine.

If you love birds and language, go for it. If you’re a Country File fan, and set your Amazon searches to “literary fiction releases”, then you might be on to a winner here.

But most of you don’t love birds. I know this as I’ve bored more than a few of you with my own interest more than once. And for you guys, I don’t think you’ll like this. Even I, for whom this book was such a good fit, skipped on a couple pages once or twice when I absolutely couldn’t read again about exactly why this guy loves rooks.

I’m going to plump right in the middle.

Next week, not a book about birds.