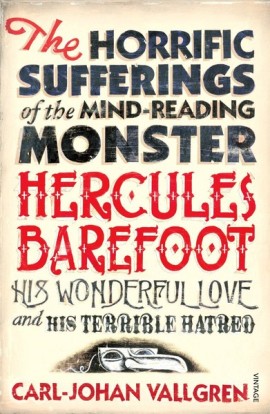 The Horrific Sufferings of the Mind-reading Monster Hercules Barefoot: His Wonderful Love and His Terrible Hatred, by Carl-Johan Vallgren (Vintage: 2006). I’m just going to call this Hercules Barefoot if it’s all the same to you. It’s the story of a 19th Century mute, disabled dwarf who can basically read minds. The world’s not that nice to him, so he’s not that nice back. Oh, and when he loves, he loves big.

Every kick-ass novelist needs a few specific tools, and one of the most difficult to pin down is imagination. Well, step forward Vallgren, because this guy has imagination licked.

He knocked me back with The Merman last year, so I was keen for another dose, and in the scope, the colour and the hard-at-work imagination, Vallgren kept up his side of the bargain. Hercules Barefoot had a bunch of the same stuff I loved about the Merman. At the head of the queue was his ability to keep a stunning balance between fantasy and reality. The stuff he describes is fantastic, but he also makes it feel real.

And there’s that colour thing too. The thing that makes me love DBC Pierre so much. And Glen Duncan too, when he gets it right. It’s probably my one single favourite thing about any writing. When it’s so bloody rich that the colour bursts off the page, and you get breathless trying to take it all in. Don’t get me wrong, it’s not worlds of rainbows and honeydrops. The backdrop of this is quite bleak, as it was in the Merman. But Vallgren paints it so vividly and with such energy that you find it tough to turn your back on it.

But I enjoyed the Merman a bunch more than this. Vallgren wrote Hercules Barefoot a while ago, certainly a few years before the Merman, and it seemed to me his storytelling was still a little underbaked when he did this.

He gets caught up in the world he’s created and forgets about the story. There’s not enough plot in here to put it right amongst the best. Don’t get me wrong, I’m not asking for thrillers in every book. In fact, I’m not the biggest fan of thrillers generally. But there was so much in Hercules Barefoot for Vallgren to play with, so many double-cool characters and ideas, that I feel he should have done a bunch more with it. Added more suspense. Created more tension. For long sections, the book drifted, and even got repetitive once or twice. For a book with as much raw material as this, that’s kind of unforgiveable.

Hells, this was written ages ago, and he’s done better since, so let’s not be too harsh. There were a few neat plotting tricks used. Different perspectives jumped around quite nimbly. Story told between lines and outside the front-and-centre narrative. All decent skills, just not on show often enough. And what he lacked in structure, he made up for in writing style, imagination, original characters, and all that junk.

So where does that leave us?

Seve and a half really. But I hate halves, and 8 felt like too many big biscuits.

Next week, another translated book, this one from an Israeli writer who’s done something which could be called a novel, a play, or a book of poetry depending on how you look at it. Intriguing, right?